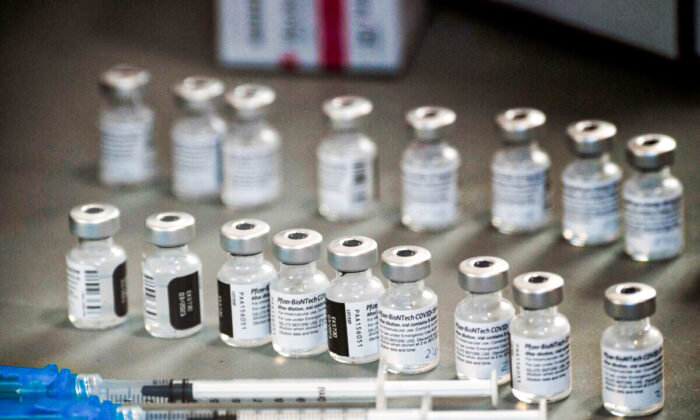 Syringes and vials of the Pfizer-BioNTech COVID-19 vaccine are prepared to be administered at a drive-up vaccination site from Renown Health in Reno, Nev., on Dec. 17, 2020. (Patrick T. Fallon/AFP via Getty Images)
By Peter Wilson

A still-developing Canadian COVID-19 vaccine that is delivered by inhaled aerosol rather than an injection is set to enter Phase 2 of human clinical trials at the University of McMaster in Hamilton, Ontario.

Researchers at the university are receiving over $8 million in funding from the Canadian Institutes for Health Research (CIHR) to proceed with the new phase of trials, according to a university news release, which says the inhaled vaccine possesses “potential to induce robust mucosal immunity against strains of SARS-CoV-2, including Omicron and other variants of concern.”

“If we can show the new inhaled vaccine is safe and effective, as we anticipate, the impact will be significant for human health, medical costs and better quality of life,” said Fiona Smaill, a McMaster professor emerita of the pathology and molecular medicine department.

Smaill, who is leading trials on the inhaled vaccine alongside several of her colleagues, previously predicted the vaccine would “last longer, be more effective and stand up well to future variants,” based on earlier animal trials with it.

“Our research suggests that the next-generation COVID-19 vaccine we are currently testing will be more effective for longer, and will protect against new variants,” she wrote in an analysis report on June 2, 2022.

Smaill also said at the time that her team still needs to “understand more fully how these vaccines work,” but added they are “optimistic.”

The researchers have also suggested that a “no-needle, pain-free vaccine will be much more appealing and convenient” and could raise the number of individuals receiving booster shots.

“Researchers are concerned about the declining uptake of booster vaccines, which is part of broader pandemic fatigue,” says the university’s Jan. 20 news release.

“The new vaccine strategy will position Canada at the forefront for facing new stages of the current pandemic and preparing for the next pandemic.”

Canada’s Auditor General Karen Hogan wrote in a December 2022 audit that about $1 billion worth of unused COVID vaccines in Canada were set to expire by the end of 2022 due to an excess supply purchased by the federal government.

“We found that the Public Health Agency of Canada was unsuccessful in its efforts to minimize vaccine wastage,” she wrote in the performance audit, titled “Report 9: COVID-19 Vaccines,” tabled in the House of Commons on Dec. 6.

“This finding matters because vaccine wastage results in a financial cost to Canadians.”

Health Minister Jean-Yves Duclos was asked during a press conference in Ottawa on Jan. 20 for updated figures on how many vaccines previously purchased by the federal government have gone to waste to date.

“I’ll ask my team to provide numbers,” he said, adding, “The numbers have changed since the last briefing.”

“You mentioned the word ‘waste,'” Duclos continued. “Wasted vaccines—but I can say that Canada received vaccines very rapidly and a great number of Canadians turned out for vaccines.”

“If we had not received vaccines so quickly, we’d probably be going through an extended period of [COVID].”