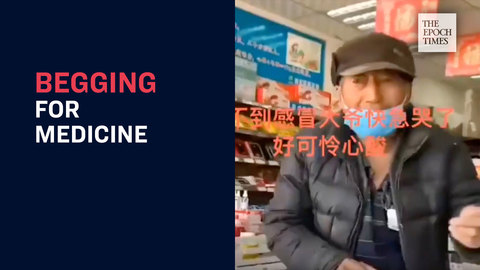 On April 22, senators Elizabeth Warren, Tina Smith, and Marco Rubio reintroduced two pieces of legislation that would reduce reliance on foreign nations, especially China, to supply ingredients needed to make various drugs. The Communist regime’s control of pharmaceutical resources in the manufacturing chain is mounting and is putting the free world at risk. This, in the wake of how the regime manipulated the pandemic to suit its political agenda.

Rosemary Gibson, senior advisor at The Hastings Center, said at a 2019 hearing of the U.S.-China Economic and Security Review Commission on July 31, “If China shut the door on exports of medicines and their key ingredients and raw materials, U.S. hospitals and military hospitals and clinics would cease to function within months, if not days.”

The Communist leadership surely knows the power it holds. A commentary from the regime-owned Xinhua News on March 4, 2020 stated: “If now China retaliates with a travel ban on the United States, a strategic control of medical products and a ban on exports will trap the United States in the vast ocean of COVID-19.”

According to the 2019 hearing on China’s role in global health, and the national security, economic, and public health concerns stemming from the American dependence on Chinese health products, 80 percent of the active pharmaceutical ingredients used by commercial sources to produce finished products come from China and India. However, the hearing also revealed that India relies on China for an estimated 80 percent of its active pharmaceutical ingredients.

Yanzhong Huang, senior fellow for global health at the Council on Foreign Relations, once wrote, “APIs (active pharmaceutical ingredients) and chemical intermediates from China are 35 to 40 percent cheaper than Indian ones.”

It was also revealed that China’s generic drugs industry is thriving as exports to the U.S. rapidly grow. Examples of generic drugs made in China by domestic companies and sold in the United States include: antibiotics, anti-depressants, birth control pills, chemotherapy for cancer treatment for children and adults, medicine for Alzheimer’s, HIV/AIDS, diabetes, Parkinson’s, and epilepsy, to name a few.

For example, the U.S. can no longer make generic antibiotics; and now, China is the leading manufacturer of antibiotics.

Li Daokui, an economist at Tsinghua University in Beijing touted at Beijing’s National Political Consultative Conference in March 2019, “Even though the sanction on chips has indeed restricted China, but some developed countries’ medical systems will suffer from reduced exports from China, the world’s largest exporter of ingredients for vitamins and antibiotics.”

The 2019 hearing also revealed that there are 5,000 to 7,000 companies registered in China’s pharmaceutical sector. China is the biggest global source of generic drugs, pharmaceutical ingredients, and other health products, including dietary supplements, biologics, and medical devices.

In her testimony, Gibson stressed that in 5 to 10 years, the U.S. will have virtually no manufacturing capacity left for generic drugs, which account for 90 percent of U.S. medicines. “We are losing control over the supply of our medicines and when we lose control over supply, we lose control over quality.” A shocking point she made was, “That’s why we have blood pressure medicines with carcinogens in them.”

Perhaps the facts sound a warning. At the hearing, Gibson said, “In 2018, more than 31,000 active duty military personnel, veterans, and their family members were notified that they may have been given blood pressure medicines containing a cancer-causing ingredient.” Also the fact that the Department of Defense procures medicines based on price, not quality, puts Americans at risk at the national level.

A market too large to ignore

Huang, on the other hand, explained that under the cut-throat, winner-takes-all bidding process, multinational pharmas lose their market share in China even with assurances of the high quality of their products.

China has emerged as the second largest pharmaceutical market in the world by revenue behind only the United States. However, U.S. health and biotech firms continue to face regulatory and other market barriers that limit their ability to sell in China and compete with Chinese firms, as stated by hearing co-chair Michael Wessel.

In the policy recommendation, Huang indicated, “We should deliver an explicit message to the Chinese side that healthcare products should not be used as a weapon in the U.S.-China trade war.”