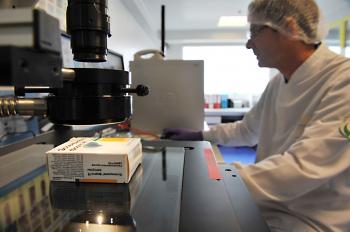 AUTHENTICITY: An electronic microscope is used by a laboratory in Tours, France, to verify the authenticity of products in a bid to fight against smuggled and counterfeit medicines. (Alan Jocard/AFP/Getty Images)
Business & Markets

Caroline Dobson
View profile
Follow
biggersmaller
Print
Counterfeit drugs have become a significant concern for the pharmaceutical industry. Originally, the issue was confined to Africa and Asia. However, the reported problems of parallel trading and Internet pharmacies have recently spread to the United States and Europe.

Counterfeit drugs are popular among “lifestyle drugs” and regular high-demand household items, such as aspirin, antacids, and pain killers, according to MarketsandMarkets (M&M), a global research and consulting company.

According to the M&M research house, the global counterfeit drug business is worth around $670 billion annually. There have been measures to increase the security of packaging—for instance retail giants such as Wal-Mart in the U.S. and Tesco in the U.K. have required suppliers to install radio frequency identification tagging (RFID) on their medical products. RFID technology utilizes communication through radio waves to exchange information between a reader and an electronic tag when installed on an object, enabling identification and tracking.

The World Health Organization's (WHO) working group on counterfeit medical products recently held meetings to address unsafe and illegal medicines. Results from these meetings have confirmed that there are increased reports of incidents connected with counterfeit medications for serious medical conditions, such as central nervous system disorders and cardiovascular diseases. The number of countries documenting counterfeit cases has increased from 100 to 118 since 2006, suggesting that the problem has expanded.