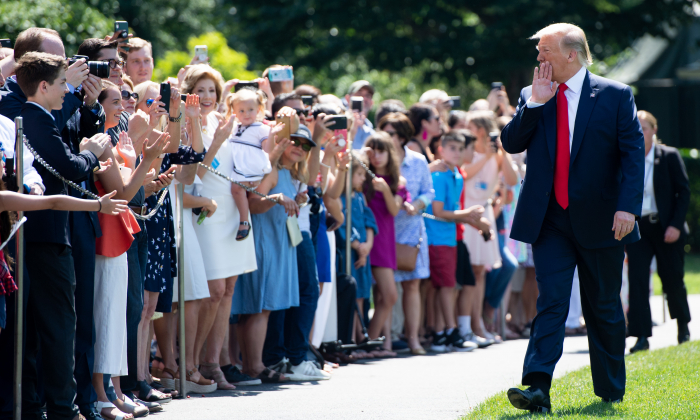 President Donald Trump greets guests prior to departing on Marine One from the South Lawn of the White House in Washington on July 5, 2019. (Saul Loeb/AFP/Getty Images)
Trump Administration

Pharmaceutical companies’ shares dropped in price on July 5 after President Donald Trump said his administration is working on an executive order that would require drug companies to price their medicines based on the lowest amount paid for the same drug by another nation.

SPDR S&P Pharmaceuticals, an exchange-traded fund that tracks the stocks of major pharmaceutical companies, fell 1.6 percent on July 5. The index began declining immediately after Trump told reporters on the White House lawn about preparations for the executive order.

“We’re going to be announcing something very shortly: a favored nations clause. As you know, for years and years, other nations paid less for drugs than we do. Sometimes by 60–70 percent. We’re working on it right now, we’re working on a favored nations clause, where we pay whatever the lowest nation’s price is. Why should other nations—like Canada—but why should other nations pay much less than us? They’ve taken advantage of the system for a long time, pharma,” Trump said.

“But we’re working on, right now, a favored nations clause, so that whatever the lowest nation is anywhere in the world, or company, but the lowest nation or company, then what happens is, we will pay that amount. And that’s being worked on right now. We’re gonna do it in the form of an executive order,” the president added.

In October 2018, Trump announced a new rule that would bring the prices Medicare pays closer to what other countries pay and save taxpayers an estimated $17.5 billion over the next five years. The president unveiled the rule after the Department of Health and Human Services released a report on drug prices under Medicare Part B, which estimated that the United States is paying on average almost two times what other countries are paying.

Trump has taken a number of steps to lower drug prices. In January, the administration proposed a rule to cut out the middlemen and require drug companies to pay rebates directly to consumers. Every year, an estimated $150 billion is passed around the rebate system to middlemen like pharmacy benefit managers with consumers left entirely in the dark.

Another administration rule will require drug companies to list the prices for their medicine in television advertisements. Earlier this month, the president issued an executive order which, once implemented, would require hospitals to display prices for services upfront.

“When prices are transparent and competition is encouraged, consumers win. We believe that can prove true in health care as it has in every other area of the American economy,” Alex Azar, secretary of Health and Human Services, wrote in an op-ed in February.

“Delivering such a health care system will mean some disruption to the status quo. But anyone who wants to defend that status quo will have to explain why they want to keep prices high and ­patients in the dark.”

Congress has the most power to tackle high drug prices. Democrats and Republicans have competing plans for how to address the issue. Consensus between the two parties is complicated by the Democrats’ reluctance to work on legislation backed by Trump. The president urged the Democrats to come to the table in a Twitter message on July 7.

“Last year was the first in 51 years where prescription drug prices actually went down, but things have been, and are being, put in place that will drive them down substantially. If Dems would work with us in a bipartisan fashion, we would get big results very fast!” Trump wrote.