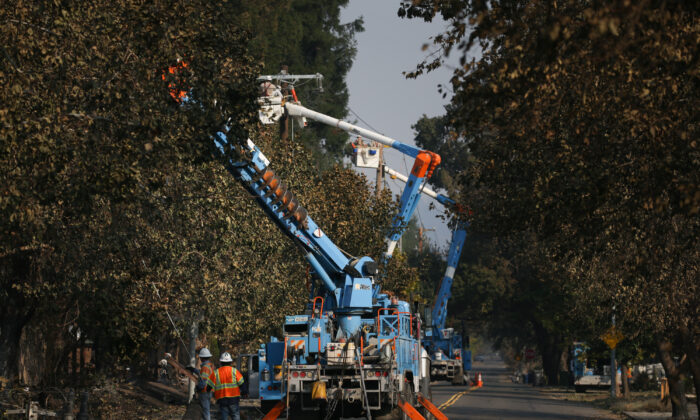 PG&E Corp., seeking to fend off a group of bondholders trying to take control of its bankruptcy, said it has lined up $34.4 billion in debt financing commitments for its planned reorganization.
The California utility giant has received the commitments from banks including JPMorgan Chase & Co., according to court papers filed Oct. 6. Terms of the financing are “far superior” to a rival proposal from the bondholder group led by Elliott Management Corp. and Pacific Investment Management Co., the company said.

The financing was included in a PG&E filing defending its exclusive right to move forward with a plan to exit the largest utility bankruptcy in U.S. history. While the judge overseeing the case has already ruled that the San Francisco-based company should keep that control, the bondholder group is fighting to kill the exclusivity so it can pitch a proposal that would all but wipe out current shareholders and give creditors a controlling stake.

PG&E blasted the group’s proposal in the Oct. 4 filing, saying it would lead to an “unjustified windfall” of billions of dollars for the creditors at the expense of shareholders and utility customers. The plan, for example, would reinstate long-term debt at above-market rates, PG&E said.

U.S. Bankruptcy Judge Dennis Montali is scheduled to consider arguments over whether the company should retain its exclusivity during a hearing Monday. He signaled he’ll be setting a high bar for the creditors behind the competing $29.2 billion restructuring plan, sending PG&E shares soaring 14% Oct. 4.

Montali wrote in an order late Oct. 3 that the matter was already “fully briefed, argued and decided” when he ruled in August. The creditor group will have to explain “what has changed in such a short period of time to justify reversing course,” he wrote.

The order could lend support to PG&E as it works to exit bankruptcy by the middle of next year. The company has been fighting creditors for months while struggling to balance the interests of ratepayers, shareholders, California regulators and the victims of wildfires ignited by its equipment. The blazes are what forced PG&E into bankruptcy, saddling it with an estimated $30 billion in liabilities.

PG&E said in its court papers Oct. 4 that it has made substantial progress toward getting a plan confirmed. It has obtained more than $14 billion in equity commitments and settled for $11 billion with insurance companies and holders of insured claims, including the Baupost Group, which is also a large shareholder. The insurance group said Oct. 4 that it opposed Elliott’s effort to allow competing reorganization plans.

The Elliott and Pimco group is proposing a restructuring that would pay out $25.5 billion to victims of the wildfires and their insurers. A group of wildfire victims have signed off on the plan and are supporting the creditors’ petition to strip PG&E of its exclusivity.

The PG&E filing on Oct 4 cited an email exchange between a wildfire attorney and Elliott to buttress the company’s argument that the two were working in their own interests at the expense of other parties. After being informed by Elliott of a settlement between PG&E and insurance companies, one of the wildfire victims’ attorneys, Frank Pitre, replied, “Let’s get our deal done and screw them all!,” according to the filing.

Pitre said in an email to Bloomberg that he will respond to the PG&E filing in court. The creditors group declined to comment.

PG&E said Elliott and the fire victims hadn’t presented “any evidence to support the magnitude of claims Elliott has taken upon itself to settle.” The utility reiterated its proposal to enter into mediation with fire victims to reach a settlement.

Attorneys for wildfire victims have expressed frustration with PG&E over reaching a settlement and moved last month to align themselves with Elliott and the other bondholders. PG&E’s biggest labor union, the official creditors committee that includes power providers, and ratepayer advocates and a separate wildfire victims group also supported opening up the bankruptcy to competing plans in filings earlier last week.

Montali, however, appears hesitant to give the bondholders too much control over the company’s path forward, said Katie Bays, a utility analyst for Sandhill Strategy LLC.

“I think the judge is skeptical of taking exclusivity out of PG&E’s hands and giving that much influence to the creditors and tort committee,” Bays said. “Just because the creditors and the wildfire victims beat PG&E to the punch doesn’t mean that the exclusive right gets taken away.”