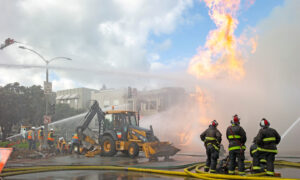 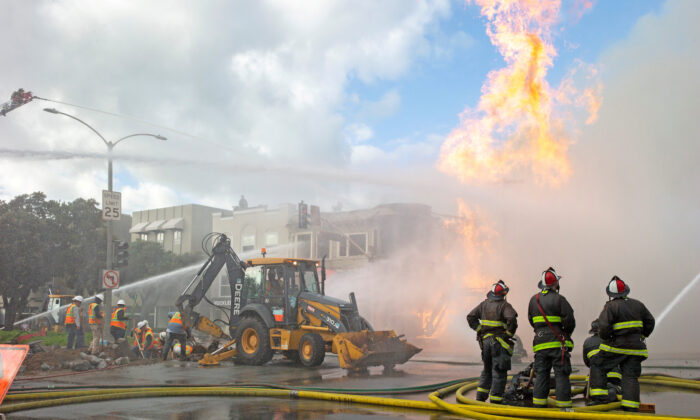 Firefighters battle a fire following an explosion at Geary Boulevard and Parker Avenue as PG&E officials dig up the ground to reach the pipe in San Francisco, Calif., on Feb. 6, 2019. (Santiago Mejia/San Francisco Chronicle/Reuters)
US News

Pacific Gas & Electric on Thursday was fined $4 million for the deaths of 84 people killed in a Northern California wildfire ignited by its electrical grid. The sentencing comes as the nation’s largest utility prepares to end a 17-month bankruptcy proceeding triggered by the catastrophe.

The maximum penalty assessed by Butte County Superior Court Judge Micahel Deems was a mere formality, given that PG&E reached a plea agreement three months ago to resolve manslaughter and other charges. They stemmed from a November 2018 inferno that wiped out Paradise, California, a town located 170 miles (275 kilometers) northeast of San Francisco.

Deems rebuked PG&E for its “callous disregard” for human life and pointed out that if an individual had confessed to the same crimes as the company did, he would have been able to order a sentence of 90 years in state prison.

But as a corporation, PG&E can not be imprisoned, forcing the judge to issue the maximum fine allowed under California law. Although PG&E has been in bankruptcy since early last year, the penalty won’t leave a big financial dent, given that it brought in $17 billion in revenue last year.

PG&E’s harshest punishment came in the form of a public shaming that laid bare the horrific toll of its reckless behavior. The company’s dereliction also was detailed in a summary of a scathing grand jury report.

The sentencing came after two days of courtroom drama that included PG&E’s outgoing CEO, Bill Johnson, solemnly pleading guilty on behalf of the San Francisco company for 84 felony counts of involuntary manslaughter while staring at pictures of each victim. The families of the dead then spent an emotionally draining day in court telling the heartbreaking stories of their anguish and venting their anger.

PG&E used the proceedings to express its regret for the lethal decisions that caused the fire and has promised to overhaul a corporate culture that long emphasized boosting profits for investors over protecting the safety of the 16 million people who rely on the utility for power.

“On behalf of everyone at PG&E, I am truly sorry for the terrible loss of life and the physical and emotional damage resulting from the fire,” said a PG&E board member, Bill Smith, who will replace Johnson as the company’s interim CEO June 30.

“I recognize no apology, no plea, no sentencing can undo that damage,” Smith continued in his statement of contrition to Deems. “And no passage of time can lessen the anguish that we heard expressed in this courtroom.

“All of us know actions speak louder than words. We have taken action and we will continue to take action to combat the growing threat of wildfires. and to keep our customers and our communities safe.”

PG&E is about to be given a new financial life with the imminent approval of its $58 billion plan for getting out of bankruptcy. U.S. Bankruptcy Judge Dennis Montali said late Wednesday that he intends to approve PG&E’s plan Friday after some minor details are worked out.

The complex plan includes $13.5 billion earmarked for the survivors of the fire, as well as tens of thousands of other people who lost family, homes, and businesses in other catastrophic wildfires caused by PG&E’s crumbling equipment during 2017 and 2018.

Before that happens, PG&E had to endure one more day of castigation in a bucolic community that is still struggling to recover from the devastation left behind by the 2018 fire, which burned through 153,000 acres. Nearly 19,000 buildings were destroyed, including about 14,000 homes. Prosecutors said 85 people died in the blaze, but could not find the company culpable for one of the deaths.