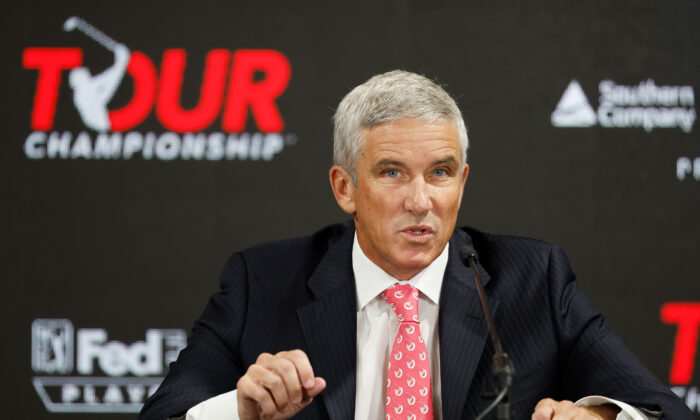 The PGA Tour is overhauling its schedule and boosting its prize pool in response to a players meeting last week in Delaware held amid pressure from the upstart LIV Golf Series.

Commissioner Jay Monahan announced on Aug. 24 that the top players will commit to taking part in at least 20 events, including 12 that will be given “elevated” status immediately with four events later to reach that level. An average purse of $20 million will be available at each.

“Our top players are firmly behind the Tour, helping us deliver an unmatched product to our fans, who will be all but guaranteed to see the best players competing against each other in 20 events or more throughout the season,” Monahan said at a news conference ahead of the Tour Championship at East Lake Golf Club in Atlanta.

“This is an extraordinary and unprecedented commitment, a testament to who these guys are and what they believe in.”

And he also made it clear that players who jumped to the LIV series for big-money contracts won’t be welcomed back to benefit from the upgraded Tour compensation.

“They’ve joined the LIV Golf Series and they’ve made that commitment. For most of them, they’ve made multiyear commitments,” Monahan said. “As I’ve been clear throughout, every player has a choice, and I respect their choice, but they’ve made it. We’ve made ours. We’re going to continue to focus on the things that we control and get stronger and stronger.

“I think they understand that.”

Phil Mickelson, Dustin Johnson, Bryson DeChambeau, and Brooks Koepka are among the big-name players to jump to the controversial, Saudi-backed LIV circuit. They have been suspended from the PGA Tour.

The new PGA Tour structure will begin this fall with the start of the 2022-23 season. Previously, the top players, who will be designated by the revised Player Impact Program (PIP), were required to play in only 15 tournaments.

“I think what came out of the meeting last week and what Jay just was up here announcing is the fact that we’ve all made a commitment to get together more often to make the product more compelling,” McIlroy added.

The top players now will be committed to playing, provided they qualify, to the four major tournaments, the three FedEx Cup playoff tournaments, The Players, the Genesis Invitational, the Memorial Tournament, Arnold Palmer Invitational, WGC-Dell Match Play, and Sentry Tournament of Champions.

In addition, they will play in four more elevated events, still to be announced, as well as three tournaments of their choosing.

Monahan also announced a bonus pool to the 20 top players in the PIP will double to $100 million as well as an earning assurance program for fully-exempt players at the rookie level on up.

They will earn at least $500,000, with the PGA Tour making up the difference between that figure and what the players earned on the course.

Rookies will be paid up front to help them financially.

“This is a remarkable time for the Tour,” Monahan said. “We have and always will be the ultimate platform for a player who wants to compete for the trophies and the titles that matter most. To now have our top players rally around this organization and commit to a portfolio of tournaments like never before, I think our fans, our partners, our players are going to love it. I promise you, there’s more to come.”