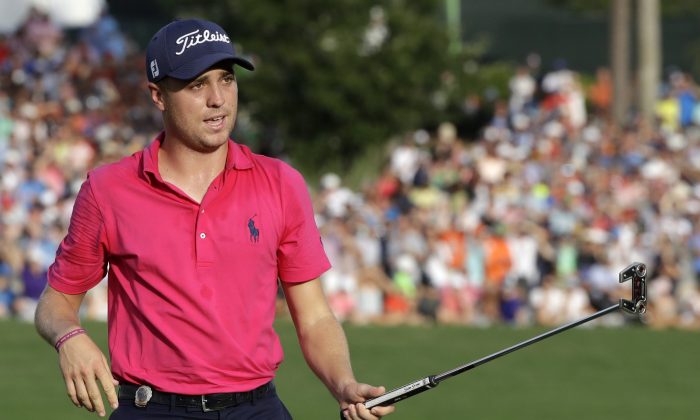 Justin Thomas celebrates after the final round of the PGA Championship at the Quail Hollow Club on Aug. 13, 2017, in Charlotte, N.C. (AP Photo/Chris O'Meara)
Golf

CHARLOTTE, N.C.—The 99th PGA Championship played at Quail Hollow marked the final major for 2017. Here’s a summary of the key winners and losers from the event.

The 24-year-old earned his first major championship with gritty play during the tense final round. He benefited from some good breaks—most notably his tee shot which was heading far left at the par-5 10th and then bounced off trees, clearing a left-hand bunker, and finding the fairway. Thomas would gain a critical matching birdie against his playing partner Hideki Matsuyama when his effort hung on the lip and only fell into the cup a few second later.

To his credit, Thomas played a brilliant approach to the demanding long par-3 17th and then dropped the 15-foot birdie putt to effectively close out the championship.

Hosting its first major, the North Carolina venue proved to be a demanding test. Credit goes to the PGA of America field team led by Kerry Haigh in re-emphasizing the need for accurate driving of the ball. The dense Bermuda rough proved a formidable obstacle for those unable to do so consistently.

While a few of the putting surfaces were extremely demanding, with the fourth leading the way, overall the course provided the most demanding test for all the majors played in 2017.

The announcement just prior to the start of the event has the PGA Championship moving in 2019 to May. The PGA Tour benefits in having its Players Championship go back to its original March date, thus allowing the Tour to revamp its Fed-Ex Cup Playoffs so the series of events can culminate on Labor Day weekend.

Tied in the final round, Kisner was unable to hold the lead but his determined efforts showed a golfer fully capable in playing at the highest of levels. Kisner benefited from a set-up where hitting fairways was a huge advantage. The 33-year-old still must get over the hurdle in playing well during a final round of a major event but he has successfully overcame all other impediments in getting far in his career.

He could have “mailed it in” during Sunday’s final round. Fowler hung in gamely shooting a 67 and finished with a tie for fifth. Still he must earn his first major championship but Rickie is no longer just golf’s marketing wonder—he has the game to match.

With a solid final round, he could have become Japan’s first major winner, but instead finished with a 72 and his back nine woes with three straight bogies clearly weighed him down. A good birdie at the par-5 15th had him rejoin the hunt but his missed four-footer for par at the 16th was the nail in the coffin.

The No. 1-ranked player finished well with a 67 and a tie for 13th but this year’s performances in the majors—save for The Masters he missed because of injury—were disappointing. DJ has the talent but questions linger: Does he have the passion to go beyond?

The pre-tournament favorite was unable to hit enough quality approaches to go in tandem with his top-tier driving game. He ended with a final round 68 and tie for 22nd. McIlroy announced after his play that he may be taking extended time to deal with a variety of physical ailments—a rib injury sidelined him for a good deal of the 2017 season and his back has been especially tender. It’s hard to believe he won his last major in 2014 and has been stuck there since.

He showed plenty in moving into contention through two rounds but his utter bumbling efforts at the 18th during the third round was shocking for its boldness that turned it into total foolishness. Day quadruple-bogied the 18th and although he played better on Sunday with a 70, his overall positioning heading into the final round would have been helped considerably with much smarter play when ending Saturday’s round.

The American star Ryder Cup player from Hazeltine last year had a quality final round which pushed him squarely into the fray. As he stood on the 72nd hole a par could have kept him close enough to give Thomas something to think about when he arrived at the demanding closing hole at Quail Hollow.

Reed found a fairway bunker off the tee and played a quality approach just short of the green. Instead of playing a low running high percentage chip and run shot, Reed opted to play a lofted wedge and the ball stopped considerably short of the hole. Reed would miss the par putt from 15 feet and left Quail Hollow wondering what might have been even with a closing round of 67 and a tie for second.