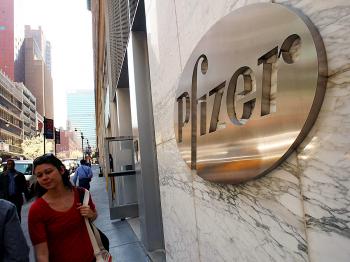 Pfizer-Wyeth Deal a Sign of the Times for ‘Big Pharma’

Antonio Perez
View profile
Follow
biggersmaller
Print
NEW YORK—Pfizer Inc.’s deal to acquire rival Wyeth for $68 billion is stirring speculation that a new wave of consolidation is about to sweep through the pharmaceutical industry.

Pfizer, the New York-based world’s largest pharmaceutical company, is sitting on a large pile of cash that investors have clamored for more acquisitions—especially as the patent on Pfizer’s biggest money-generator, cholesterol drug Lipitor, is set to expire in 2011.

Valuation of the deal was based on a 25 percent premium over Wyeth’s closing price on Friday of $43.74. Its stock jumped 12.6 percent after news of a possible deal.

Pfizer’s recent stock price has been dogged by stagnant revenues, a diminishing drug pipeline, high research and development costs, competition from generic drug makers, and according to some analysts, a lack of innovation. Last week Pfizer announced that it was cutting about 800 R&D staff.

On the surface, Wyeth instantly provides Pfizer with a broader portfolio of healthcare products and services. The company has a broad range of products including its best-selling pneumococcal vaccine Prevnar, its popular consumer pain reliever Advil, and its line of biotech drugs.

The possible merger is a clear indication that Pfizer intends to acquire new drugs and revenue streams to replace the sales it would lose in 2011 as the Lipitor patent expires. Lipitor alone provided Pfizer around $12 billion in revenues in 2007.

Some analysts believe that big pharmaceutical companies would continue to seek acquisitions and more consolidations are on the way, especially in today’s market where they face stiff competition from generic drug makers.

According to 2008 data from IMS Health, generic drug makers control more than 67 percent of the market for prescription drugs that have generic alternatives, and that figure should increase as the current recession cuts into prescription drug spending by U.S. consumers.

Generic drug makers aren’t the only bad news for “Big Pharma.” According to a recent BusinessWeek report, “Congress is widely expected to restrict direct-to-consumer advertising by drug companies this year, and much stricter limits were put in place last year on how the industry markets to doctors.”

CEOs at other major players such as Johnson & Johnson and Bristol-Myers Squibb Co. have already indicated that their companies are seeking potential partners.

Cutting to the Bone

Some analysts question whether the deal would benefit Pfizer—which already has cut staff in R&D—in the long run. The Wall Street Journal said the deal could save the combined companies billions of dollars in R&D, back office operations, and sales and marketing.

But pharmaceutical companies traditionally depend on R&D and sales and marketing to generate revenues, and according to analysts, both companies have already cut the fat to the bone in both areas.

“Unless these R&D departments are filled with paper-pushers and not scientists, then slashing R&D can ultimately lead to only one thing: reducing the number of new drugs you produce,” BNET analyst Jim Edwards warned. “It doesn’t matter if the expenses are internal or for acquisitions—drugs costs money. No R&D money, no new drugs.”

“So, again, that raises the question of whether merging for a one-time saving on the elimination of duplicate tasks is really worth it,” he continued.