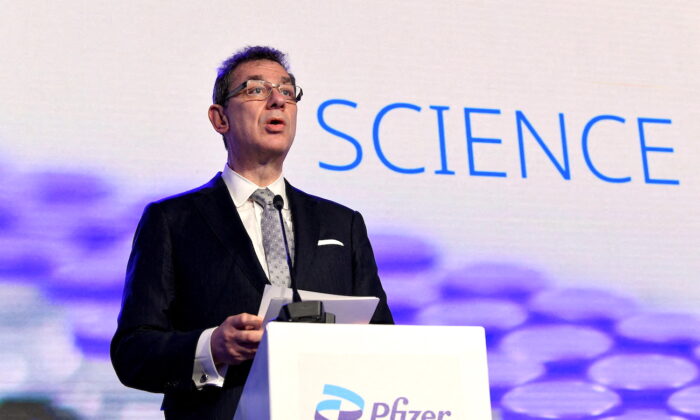 Pfizer CEO Albert Bourla talks during a press conference at the factory of Pfizer in Puurs, Belgium, on April 23, 2021. (John Thys/Pool via Reuters)
Businesses in COVID-19

Pfizer to Ask US Regulators to Authorize Second Booster Due to Waning Effectiveness: CEO

“Clearly there is a need in an environment of Omicron to boost the immune response,” Bourla said on CNBC’s “Squawk Box.”

Pfizer’s vaccine waned over time in protection against both infection and hospitalization when the Delta variant of the virus that causes COVID-19 was dominant in the United States, real-world data and studies showed. The issue has grown more pronounced since Omicron displaced Delta in late 2021.

Bourla said data Pfizer executives have seen indicates the vaccine protection “is very good” after three doses when it comes to protecting against severe disease.

But that protection “doesn’t last long,” he added, with waning starting after several months.

Moderna executives have also said they believe a second booster will be necessary.

Americans 12 and older with weakened immune systems are already able to get a second booster, but the rest of the population can only get one at this time. Children 5 to 11 can only get a primary series of Pfizer’s vaccine, while children under 5 are not allowed to get any of the vaccines.

Recent studies show that the protection from vaccines against severe disease drops over time, including one from the Centers for Disease Control and Prevention (CDC). Additionally, data show the vaccines provide little to no protection against infection from Omicron.

Some experts have raised concerns about repeated booster shots, though some later reversed the stance.

The WHO also reversed its guidance on March 8 after recommending against booster shots.

Dr. Robert Malone, who helped invent the messenger RNA technology on which the Pfizer and Moderna vaccines are built on, told The Epoch Times that “currently available data from Israel and the rest of the world indicates that further boosting does not provide a durable protection against this virus and is associated with significant adverse events, as documented by the nine-page listing of adverse events recently disclosed under court order.”

Malone was referring to a document (pdf) released by the Food and Drug Administration to a transparency group.

Additionally, further boosting “may impair immune system function and may increase risk of infection by current SARS-CoV-2 strains,” Malone said, referencing how in some areas, hospitalized patients are more likely to be vaccinated than not.