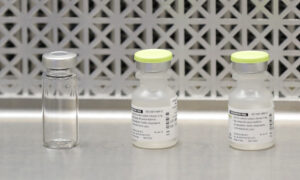 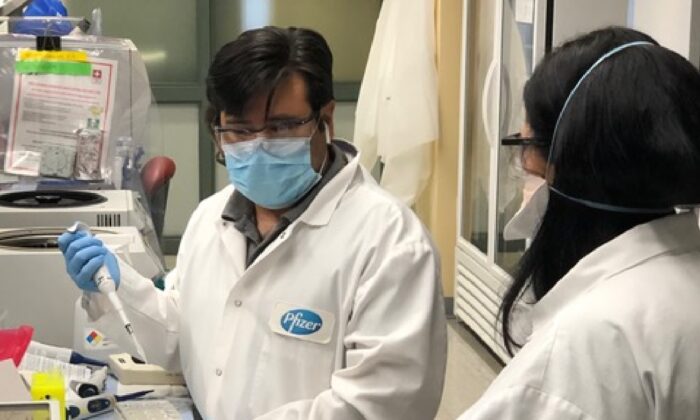 Human trials on potential CCP virus vaccines produced by Pfizer started in recent days, the company announced on May 5.

Researchers around the world are racing to develop a vaccine for the CCP (Chinese Communist Party) virus, but few are in human trials.

Pfizer developed the candidate vaccines in partnership with BioNTech, a German company.

“With our unique and robust clinical study program underway, starting in Europe and now the U.S., we look forward to advancing quickly and collaboratively with our partners at BioNTech and regulatory authorities to bring a safe and efficacious vaccine to the patients who need it most,” Pfizer CEO Albert Bourla said in a statement.

The phase 1 and 2 clinical trials are aimed at determining the safety, effectiveness, and optimal dose level of the four candidates, which are all based on a genetic platform called mRNA, or messenger RNA.

The four candidates each have a different combination of the mRNA format and target antigen, a substance that provokes an immune response.

“We are optimistic that advancing multiple vaccine candidates into human trials will allow us to identify the safest, most effective vaccination options against COVID-19,” Ugur Sahin, CEO of BioNTech, said in a statement.

The portion of the trial in the United States will enroll up to 360 healthy volunteers in two age groups, one of adults 18 to 55 and the other adults 65 to 85. The older group will only be injected after the vaccine proves safe in the younger group.

While testing takes place on the candidates, the companies are working on scaling up production in the event one proves to be safe and effective; they project having millions of doses available this year, with hundreds of millions next year.

While early projections had the first vaccines available no earlier than early 2021, President Donald Trump said May 3 that U.S. officials are confident a vaccine will be ready by the end of this year.

“Now, the doctors would say, ‘Well, you shouldn’t say that.’ I’ll say what I think. I’ve met with the heads of the big companies, these are great companies,” he said.

Dr. Anthony Fauci, head of the National Institute of Allergy and Infectious Diseases and a key member of the administration’s CCP virus task force, said in a televised interview last week that having hundreds of millions of doses ready by January 2021 “is doable if things fall in the right place.”