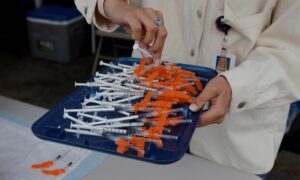 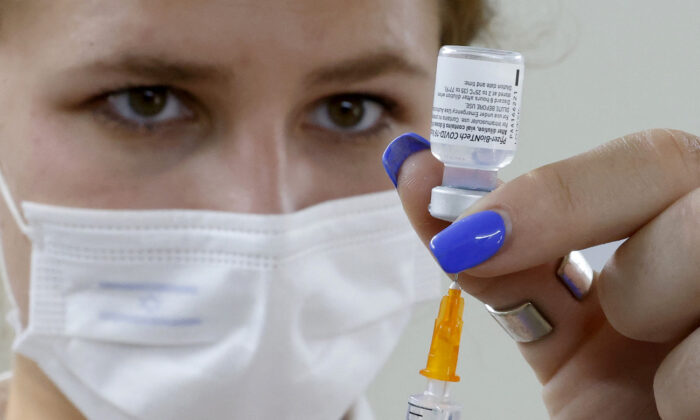 An Israeli medical worker prepares a dose of the Pfizer/BioNTech COVID-19 vaccine from the Magen David Adom in Tel Aviv, on July 5, 2021. (Jack Guez/AFP via Getty Images)
Vaccines & Safety

The ability of the Pfizer/BioNTech mRNA vaccine to prevent infections and prevent symptomatic COVID-19 has dropped to 64 percent, the Israeli government announced late Monday. There was also a smaller drop in the vaccine’s efficacy in preventing hospitalizations and more serious illness.

The decline in effectivity was observed amid the spread of the Delta variant of the CCP (Chinese Communist Party) virus in the country.

In particular, the efficacy rate of the Pfizer vaccine against infection and symptomatic disease was 94.5 percent between May 2 and June 5, but dropped to 64 percent from June 6 to early July, online Israeli outlet Ynet news reported, citing figures from the health ministry.

The vaccine’s efficacy in preventing hospitalizations and serious illness fell from 98.2 percent between May 2 and June 5, down to 93 percent from June 6 to July 3, the outlet reported.

Any person who came into contact with someone who has tested positive for the CCP virus, including those who have been vaccinated, should get tested, the ministry said.

A Pfizer spokesperson told The Epoch Times in an emailed statement that the company “cannot comment on unpublished data.” The spokesperson cited other research that showed antibodies elicited by the vaccine against COVID-19 neutralized all the variants tested, including the Delta variant—although at a reduced strength compared to the Alpha variant.

About 60 percent of Israel’s population of some 9.3 million people have received at least one shot of the Pfizer vaccine. Reports of new CCP virus cases dropped from more than 10,000 per day in January to single digits last month.

Israel subsequently loosened nearly all social distancing restrictions as well as mask mandates, though the latter was partially reimposed in recent days.

Daily cases have gradually risen since, reaching 344 cases on July 4. The number of seriously ill rose to 35 on July 4 from 21 on June 19, according to data from the ministry.

In late June, an official leading an expert advisory panel for the Israeli government said that amid the Delta variant outbreak in the country, about half of the adults who caught COVID-19 had been fully vaccinated with the Pfizer shot.

The official, Ran Balicer, said that about 90 percent of the new infections were caused by the Delta variant.

The Delta variant, first identified in India late last year, is highly contagious compared to prior strains, officials from multiple countries have said. The variant spread rapidly throughout India earlier this year before spreading to dozens of other countries.

Researchers have said it’s too early to say whether the Delta variant is more or less deadly than other variants of the virus.

Update: This article has been updated to include a statement from Pfizer.