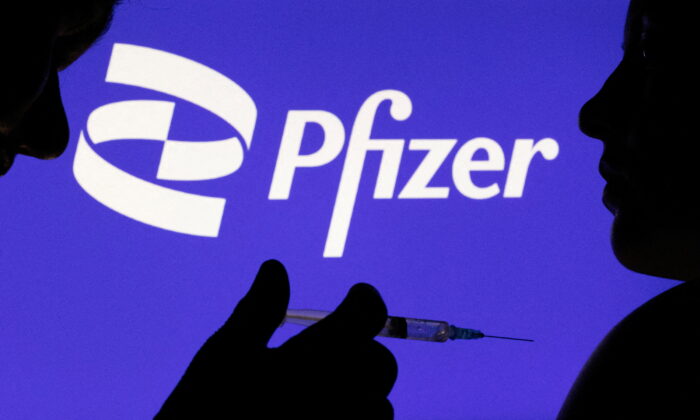 People pose with syringe with needle in front of displayed Pfizer logo in this illustration taken on Dec. 11, 2021. (REUTERS/Dado Ruvic/Illustration/File Photo)
Companies

Civil rights lawyers have said that a fellowship offered by pharmaceutical giant Pfizer is a violation of the law because it bars whites and Asians from applying.

The Breakthrough Fellowship Program is part of an effort to “increase diversity by fostering a more inclusive workplace” and “increase minority representation” at Pfizer, according to the company.

The program “works to advance students and early career colleagues of Black/African American, Latino/Hispanic and Native American descent with a goal of developing 100 fellows by 2025.”

Students will be eligible to apply to the program during their junior year of college, and, if successful, they will participate in an initial 10-week summer internship before landing two years of full-time employment after undergraduate graduation.

After two years, they will be provided with a fully paid scholarship to complete a full-time, two-year MBA, MPH, or MS Statistics program, and then receive a job at the company after completing a postgraduate degree.

Applications for the program will open at the end of this summer or the beginning of fall.

However, the program makes no mention of white or Asian applicants being eligible to participate.

Instead, under a Frequently Asked Questions document on the program, Pfizer recommends that individuals who are not from a minority group identified in the program should instead apply to “multiple programs and opportunities” that the company offers throughout the year, including its “Benefits’ Education Assistance Program.”

It also states that Pfizer is “an equal opportunity employer.”

The move has prompted backlash among civil rights experts who have said the program likely violates civil rights law.

Attorney Adam Mortara told The Washington Free Beacon that the program was “flagrantly illegal” and questioned “how it passed internal review by its general counsel.”

Gail Heriot, a member of the U.S. Commission on Civil Rights, told the publication that the program was a “clear case of liability” under federal law, pointing out that it is a violation of the Civil Rights Act of 1866, which states that all persons born in the United States, regardless of race or color, are entitled to make and enforce contracts.

Heriot also cited Title VII of the 1964 Civil Rights Act, which bans discrimination based on race, sex, religion, and more in employment.

“Major corporations seem to have forgotten that there’s such a thing as law,” said Heriot.”They seem to think that as long as they’re ‘woke,’ they’re bulletproof.”

A string of other legal experts also told The Washington Free Beacon that the program was illegal.

However, Pfizer CEO Albert Bourla, who announced he had tested positive for COVID-19 on Aug. 15 after receiving four doses of his company’s COVID-19 vaccine, touted the program as a way for students to “grow within the organization” via mentoring and professional development, which he said will “lead to parity at all levels to create a vibrant culture where every colleague has the opportunity to succeed.”

According to an annual review of the program, the first “cohort of 20 rising seniors” who completed the first phase of the fellowship in 2021 was made up of 55 percent females and 45 percent males, of which 40 percent were Black/African American, 40 percent Latinx/Hispanic and 20 percent “two or more races.”