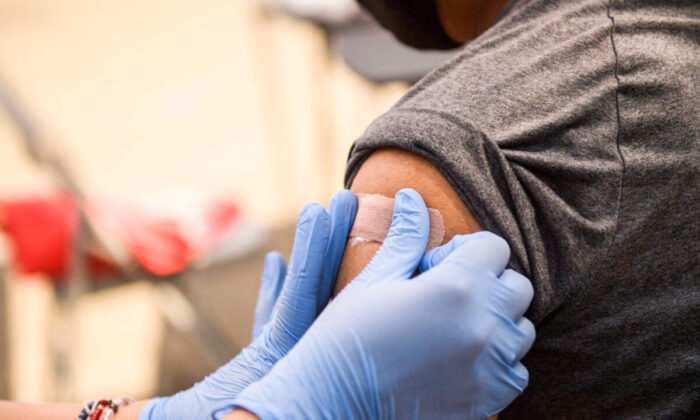 A person receives a bandage after their first dose of the Pfizer COVID-19 vaccine at a clinic in Los Angeles on Aug. 7, 2021. (Patrick T. Fallon/AFP via Getty Images)
Vaccines & Safety

Pfizer and its German partner BioNTech on Tuesday requested emergency use authorization (EUA) from the U.S. Food and Drug Administration (FDA) for a second COVID-19 booster dose for seniors.

This would be the fourth dose to the regimen of the Pfizer-BioNTech (Pfizer) COVID-19 vaccines for those aged 65 and over.

An FDA spokesman said the agency received the EUA request.

“We will review the request as expeditiously as possible using our thorough, science-based approach,” the spokesman said.

Pfizer and BioNTech said in a release their FDA submission is based on two real-world datasets from Israel “analyzed at a time when the Omicron variant was widely circulating.” In Israel, a second booster is authorized for many people over 18. The companies said that both data sets “showed evidence that an additional mRNA booster increases immunogenicity and lowers rates of confirmed infections and severe illness.”

Citing Israeli Ministry of Health records for over 1.1 million adults aged 60 and over who had no known history of COVID-19, Pfizer and BioNTech said rates of confirmed infections were two times lower and rates of severe illness were four times lower among those who got a second booster, compared to those who received only one booster.

The other dataset comes from an ongoing open-label, non-randomized, clinical trial of 700 health care workers aged 18 and older at a single study center in Israel, who had been vaccinated with three doses of the Pfizer vaccine.

“Additionally, there was an 8-fold and 10-fold increase in neutralizing antibody titers against the Omicron variant (B.1.1.529) at one and two weeks after the additional booster dose, respectively, compared to five months after the initial booster,” the drugmakers announced. “The study also revealed no new safety concerns in individuals who received an additional booster dose of the vaccine.”

The companies in their release did not comment on the effects of their COVID-19 vaccine on those who have already developed natural immunity from having previously had the disease, nor did they acknowledge the role of cellular immunity (B cell and T cell immunity)—alternate mechanisms of immunity to neutralizing antibody levels—in protection from symptomatic or severe COVID-19.

The EUA request comes after Pfizer CEO Albert Bourla earlier this week told news outlets that a fourth dose of his company’s vaccine would be necessary to offset waning protection gained with the third shot.

“The protection we are getting from the third [dose] it is good enough—actually quite good for hospitalizations and deaths,” he told CBS News on March 13. But protection is “not that good against infections” and “doesn’t last very long” in the face of the Omicron variant.

“We know that the duration of the [vaccine] protection doesn’t last very long,” Bourla added. “If you get sick, you can get sick again next year. … Right now, the way that we have seen, it is necessary—a fourth booster right now.”

He also claimed it was likely people would have to get yearly COVID-19 boosters.

Some experts have questioned the need for a second booster, pointing to the dearth of well-designed trials on the effects of another shot.

“Where are the randomized trials powered to show an effect on severe disease and death?” Dr. Ramin Farzaneh-Far, a cardiologist, wrote on Twitter.

Pfizer is looking at how a fourth dose performs in its own study of 600 people, who have received three shots of the current Pfizer vaccine and will receive one dose of the current vaccine or an Omicron-targeted shot.

Pfizer saw its COVID-19 vaccine profits increase significantly to $37 billion in the past year, with its overall revenues doubling to $81 billion in 2021. The firm in February said it expects to make $97 billion in 2022.

Earlier in March, the FDA released its first batch of 10,000 pages of documents related to its EUA of the Pfizer-BioNTech COVID-19 vaccine, following a judge’s ruling in January that gave the FDA a timeline on the release of Pfizer’s safety data.

Vaccine manufacturers are immune from liability for any adverse reactions unless there’s “willful misconduct” involved. Vaccine providers are required to report any serious adverse effects or vaccination administration errors to VAERS, hosted by the U.S. Department of Health and Human Services.

The federal government has a countermeasures program that can compensate eligible persons who suffer serious injury from approved vaccines. But the burden of proof has proven a challenging process.