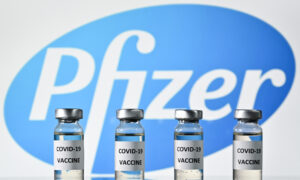 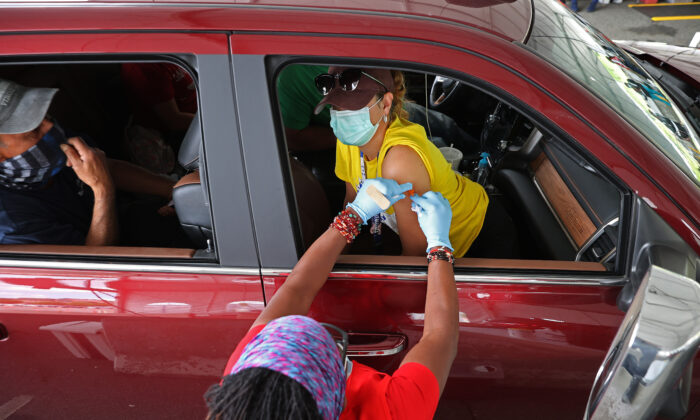 A woman receives her first dose of the Pfizer COVID-19 vaccine at the mass vaccination site at Ripken Basebal in Aberdeen, Md., on May 5, 2021. (Chip Somodevilla/Getty Images)
Vaccines & Safety

Pfizer and BioNTech are asking drug regulators in the United States for full approval for their COVID-19 vaccines.

The two companies announced on May 7 that they initiated a rolling submission for a biologics license application by submitting nonclinical and clinical data, including the most recent analyses from a phase three clinical trial, to the Food and Drug Administration (FDA) in the coming weeks.

They plan to submit more data in the coming weeks to complete the application.

“We are proud of the tremendous progress we’ve made since December in delivering vaccines to millions of Americans, in collaboration with the U.S. Government,” Albert Bourla, Pfizer’s chairman and CEO, said in a statement. “We look forward to working with the FDA to complete this rolling submission and support their review, with the goal of securing full regulatory approval of the vaccine in the coming months.”

“The BLA submission is an important cornerstone of achieving long-term herd immunity and containing COVID-19 in the future,” added Ugur Sahin, CEO and co-founder of BioNTech.

The companies asked for priority review. If that request is approved, a decision would come within 6 months instead of the typical 10-month time frame.

The FDA didn’t immediately respond to an inquiry.

“Here is why. Obviously, on some level, day-to-day vaccinations will continue, and in that way it’s not a huge deal, but it’s a signal that we have so much safety data now on millions and tens of millions of people that we can get the full authorization, the full approval. It will also give confidence to a lot of people who have been on the fence, businesses that want to mandate it for workers coming back. So I do think it’ll end up being a big deal,” he said during an appearance on ABC.

Regulators late last year granted emergency use authorization to COVID-19 vaccines produced by Pfizer/BioNTech and Moderna, some of the earliest regulatory authorization of shots against the CCP (Chinese Communist Party) virus anywhere in the world.

Both shots use messenger RNA technology, a brand new way of developing vaccines.

The FDA greenlit the Pfizer shot on Dec. 11, 2020, less than one month after the company and its partner BioNTech asked for emergency authorization.

Since then, over 134 million doses of the vaccine have been administered in the United States. It’s the most used COVID-19 vaccine in the country.

Also on May 7, Pfizer and BioNTech asked regulators to allow children between the ages of 12 and 15 to get the shot. Once enough data is acquired, the companies plan to request full approval for that age group.

Doctors have argued that COVID-19 vaccination for children is not necessary.