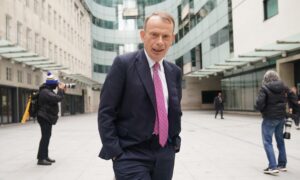 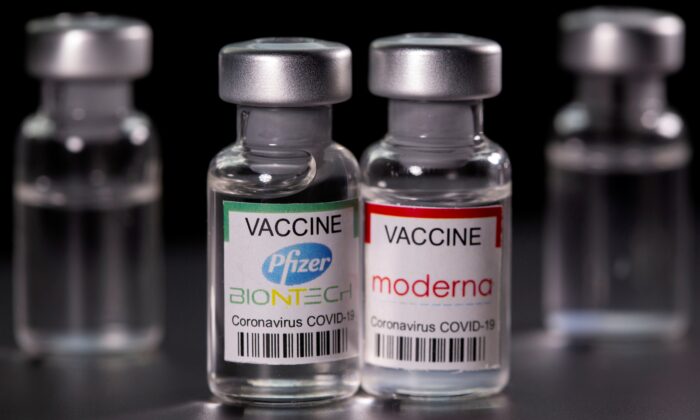 Vials with Pfizer and Moderna COVID-19 vaccine labels are seen in this illustration picture taken on March 19, 2021. (Dado Ruvic/File Photo/Reuters)

The COVID-19 vaccines developed by Moderna and the Pfizer-BioNTech alliance both may provide lasting protection against the CCP (Chinese Communist Party) virus, researchers have said in a new study.

The peer-reviewed study, published on June 28 in Nature, found that the messenger RNA (mRNA) vaccines made by Moderna and the Pfizer-BioNTech team induced a “persistent” response within secondary lymphoid tissues, “enabling the generation of robust humoral immunity.”

The effect was most pronounced in people who had been previously infected with the CCP virus, with the vaccines also found to produce high levels of neutralizing antibodies against three emerging variants of the virus.

The implication of the findings is that people who received the mRNA vaccines may be protected over the long term—for years or, potentially, for the rest of their lives.

The study didn’t look into other COVID-19 vaccine technologies, such as Johnson & Johnson’s, which, instead of mRNA, uses a modified adenovirus to deliver genetic information from the CCP virus to human cells to produce an immune response.

The study’s lead author, Dr. Ali Ellebedy, an immunologist at Washington University in St. Louis, told The New York Times that he doesn’t think the immune response would be as strong with non-mRNA-based vaccines.

It follows a separate study suggesting that the Pfizer-BioNTech vaccines—as well as the one produced by AstraZeneca—are broadly effective against the highly contagious Delta and Kappa strains of the virus.

While the Oxford University study, of which a peer-reviewed pre-proof has been published in Cell (pdf), found that both the convalescent and vaccine blood sera had a reduced ability to neutralize the Delta and Kappa variants as compared to “ancestral Wuhan related strains,” there was “no evidence of widespread antibody escape” as seen with the Beta (B.1.351, formerly “South Africa”) variant, “suggesting that the current generation of vaccines will provide protection against the B.1.617 lineage.”

However, the researchers noted that the reduced ability of the vaccine and convalescent sera to neutralize the Gamma and Kappa variants “may lead to some breakthrough infections.”

The World Health Organization’s chief scientist said recently that the Delta strain is becoming the globally dominant version of the disease.