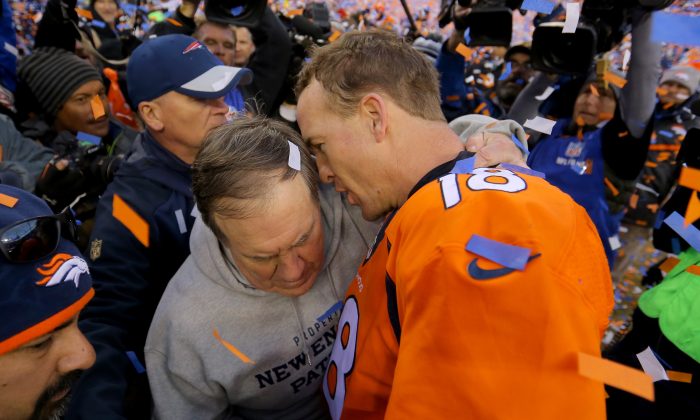 Peyton Manning may be preparing for his final game as a pro. (Justin Edmonds/Getty Images)
NFL

Although it would have surprised no one if 39-year-old Peyton Manning had announced during the year that this was going to be his last season, his seeming retirement admission to Bill Belichick on the field after the win—saying that this Super Bowl may be his “Last Rodeo”—was the first anyone has heard on the topic.

Here is the barely-audible exchange between the two legends following the AFC Championship game on Jan. 24:

If Super Bowl 50 is the last time on the field for the five-time MVP (he’ll be the oldest quarterback ever to start a Super Bowl), a win would certainly be a storybook ending for Manning—who has one Super Bowl win and plenty of heartache in the postseason.

At the very least, it would be a much different script than he’s used to.

The 2015 season has been one to forget for the 14-time Pro Bowl selection with injuries and age limiting his effectiveness. The NFL’s all-time leader in passing yards and TDs thrown, finished 2015 with a quarterback rating of 67.9—the lowest of his 17-year career.

Yet unlike most every team he’s been a part of, this Broncos team hasn’t had to solely rely on Manning’s right arm to win.

C.J. Anderson Shares Motivational Words Tom Brady Had For Him After Denver’s Win

Denver’s defense—headed up by defensive guru Wade Phillips—led the NFL in fewest yards allowed at 283.1 per game. So even though Manning’s touchdown-to-interception ratio was a career worst 9–17  in the regular season, the Broncos went 7–2 when he started.

Manning himself had to hold off the younger Brock Osweiler just to regain his starting job after sitting out with an injured foot halfway during the season.

In the postseason—which hasn’t always been kind to Manning—the seven-time All-Pro has yet to throw a pick while guiding the team to wins over Pittsburgh and New England.

But if he’s going to go out on top, he’ll need the help of his defense while facing the NFL’s most-prolific scoring offense—that of the Carolina Panthers. The Cam Newton led-squad has averaged 31.6 points per game—ahead of third-place New England, which scored an average of 29.1.

But while New England’s Tom Brady is a virtual statue in the pocket, Carolina’s Cam Newton can win with his feet or arm. The former Auburn star ran for 636 yards and 10 TDs this year for the 17–1 Panthers. For the Broncos to be able to send Manning out in style, the defense is going to have to contain him in the pocket and hope Manning can turn back the clock one more time.