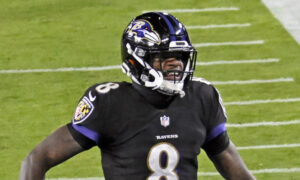 Peyton Manning, the quarterback of the Denver Broncos, was not involved in car crash despite what’s being said on Twitter.

The Inquisitr reported that the hoax involved Manning being in a car crash, breaking both his legs, and it was originally spread via a false news website. The false story said that Manning’s BMW was hit by a female driver in Denver after the woman blew through a red light.

On Twitter, a number of users spread the misinformation about Manning’s legs.

And photos taken on Saturday show Manning practicing in Colorado during the Broncos’ nascent stages of training camp.

There also were no local Denver or mainstream media reports that said he broke his legs.

The fake report stated: “The driver of the Audi was issued a citation for failing to stop at a red light before striking the vehicle driven by Peyton Manning at a high rate of speed… The full extent of his injuries are not known at this time, however, both of his legs were visibly broken and not life threatening,” according to the Inquisitr.

According to About.com’s David Emery, a false story about Manning breaking his legs was circulated last year in March, and it was likely the origin of this weekend’s rumor-fest. The false report was generated after someone typed in his name to fake celebrity news generator FakeAWish.com. The website has been responsible for a number of death hoaxes in past years.

However, the injury bug struck the Broncos on Sunday, affecting center Dan Koppen, who is going to be out for the 2013-2014 season after tearing his left ACL during training camp on Sunday, reported The Associated Press.

CBS Sports reported that from now on, Manning will be taking snaps from a fourth-string center during training camp.

Death and injury hoaxes are as old as the Internet itself. Recently, there were rumors that “Pawn Stars” mainstay Austin “Chumlee” Russell was killed, while Eddie Murphy, Justin Bieber, Bill Cosby, and Morgan Freeman have been killed off numerous times.

Here’s the video of Manning in training camp on Saturday: