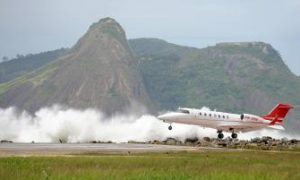 Taste of Summer in Central Park
0 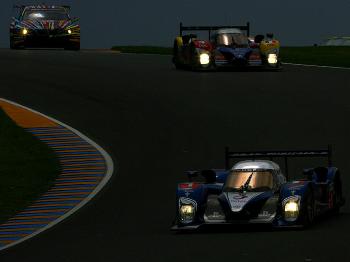 Marc Gene in the #1 Team Peugeot Total Peugeot 908 leads Nicolas LaPierre in the Oreca Matmut Peugeot and Joerg Mueller in the #79 BMW as dusk falls over the 78th running of the Le Mans 24 Hours. (Darrell Ingham/Getty Images)
Motorsports

By James Fish
Print
Peugeot still holds the top two spots at the 24 Hours of Le Mans, but one Peugeot had retired and another lost time with electrical problems, possibly opening the door for Audi.

Eight hours into the race, Franc Montagny’s Peugeot 908 HDi-FAP leads the race by a comfortable half lap ahead of teammate Olivier Panis, a lap ahead of Benoit Trulyer’s Audi R15 TDI.

Eight-and-a-half hours into the race, with night falling, Mark Gene brought his race-leading #1 Peugeot into the pits, where it went right up on dollies and into the garage. Apparently the car’s alternator had failed, and replacing it cost the car several laps.

Peugeot came in with three factory cars and one car running under the auspices of the Oreca Matmut team, while Audi brought three of their latest R15s.

Audi, (until last year) were known for perfect preparation and excellent reliability—but they were also very fast. This year the Audis lack speed, but if they have regained their technical excellence, they might have a chance to at least reach the podium.

Audi had its share of drama. Four-and-a-half hours into the race, Tom Kristensen’s ran afoul of Andy Priaulx in the #97 BMW “Art Car,” which was limping along on a flat left front tire. Kristneson hesitated before deciding to pass on the outside, but Priaulx had already decided to move to the outside to let the Audi by. Kristensen missed the BMW, but spun through the gravel and hit the wall.

Damage was minimal, and the car was sent back out after repairs, but Audi cannot not afford to lose any more time.

The battle in GT2 has been so intense it almost seems fictional.

The Risi Ferrari, after starting in last place, took the lead in class shortly after the third hour. For the next twenty laps, Gianmaria Bruni battled Olivier Beretta, who stayed glued to the Ferrari’s wing.

Pierre Kaffer took over in the Ferrari, and Emmanuel Coolard got into the Corvette, and the battle continued. Five laps after the driver changers, Collard retook the lead, but a few laps later, Kaffer took it back.

The pair continued to fight for class lead until Kaffer handed off to Jaime Melo and Olivier Gavin took over from Collard. Then the new pair resumed to struggle.

After nearly eight hours of non-stop thrashing, the Ferrari finally folded. Gearbox failure forced the car to the garage. The mechanics did an amazing job of changing the gear cluster in half the time expected, but after one lap on the track, the car was back in the pits for more repair.

The race began to take its toll during the evening hours. The #12 Rebellion Lola, with Marco Andretti co-driving, spent as much time in the pits as on the track; the Drayson Lola-Judd, familiar to American Le Mans Series fans, had about the same luck.

With night fully fallen and fatigue building in both people and machines, the race offers nothing but increasing challenges. With a third of the race gone, the outcome is less clear than ever.