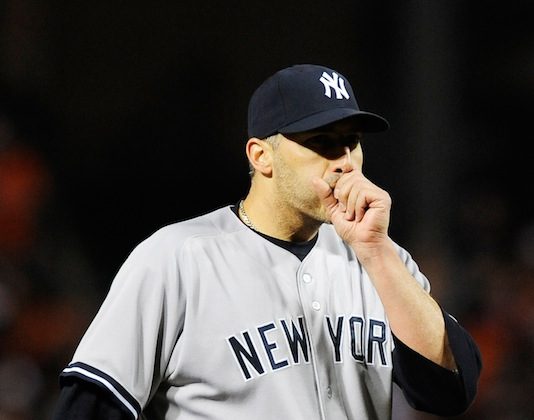 Andy Pettitte has more career postseason wins than anyone (19) and is second in strikeouts with 178. (Patrick McDermott/Getty Images)
Baseball

Pettitte Still Has It

The New York Yankees, the franchise that has been to the postseason 17 of the last 18 seasons while coming away with the grand prize five times in that span, did not get to where they are by luck.

They’ve been blessed with a current trio of postseason legends in Derek Jeter, Mariano Rivera, as well as Andy Pettitte.

While Jeter and Rivera are Hall-of-Fame locks, the 40-year-old, three-time All-Star Pettitte’s enshrinement isn’t as certain. Yet if one based his resume solely on his continued success in the postseason, Pettitte would a first-ballot member, right up there with playoff stalwarts John Smoltz, Orel Hershiser, and Jack Morris.

Though the ageless lefty may have taken the loss Monday at Baltimore in Game 2, he pitched well in a high-pressure situation—again. Already the leader in playoff wins with 19, Pettitte, who missed more than two months this season with a fractured ankle after coming out of a one-year retirement, was not hit hard.

The Orioles two-run third inning was started by a two-out broken-bat bloop single off the bat of second baseman Robert Andino. Generally broken bats are the result of a pitcher fooling the hitter into hitting the ball on the thinner part of the bat, towards the hands, resulting in a poorly hit ball.

After getting through the third relatively unscathed, Pettitte worked through leadoff errors by Jeter and Teixeira, that put a man on first, to open the fourth and fifth innings respectively without surrendering a run.

“He’s a good pitcher, he knows how to pitch and he knows how to use your weaknesses against you,” said Orioles outfielder Chris Davis, according to the Yankees’ website. Davis unloaded on one of the few Pettitte mistakes to put the two runs over in the third.

Amazingly, Pettitte has had good command this entire year, while showing no ill effects of taking off all of 2011 and having the fractured ankle that derailed him for two and a half months. In 12 starts this season, he went 5–4 with a 2.87 ERA—which would be his best ever ERA in a Yankees uniform for an entire season. (He had a 2.39 ERA for Houston in 2005).

The Yankees will certainly need his continued best this postseason. Though the team has an abundance of stars, a number of them are teetering on the edge of their primes.

Though this season could very well end up being Pettitte’s last, it might be extended if Pettitte and his trademark postseason glare, have anything to say about it. Should the series go the distance Game 5 would be Friday and Pettitte would be a prime candidate to close out the Orioles. Who better?