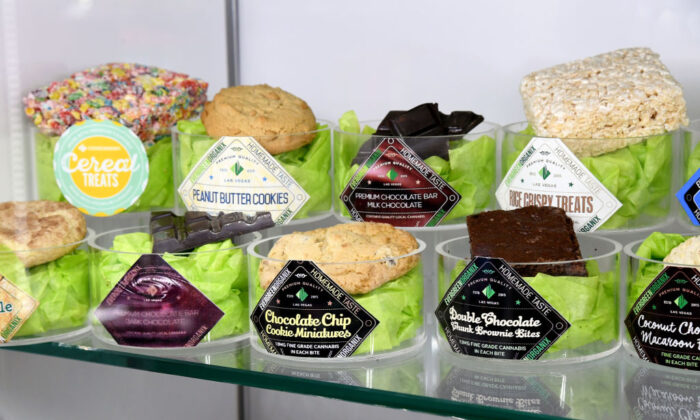 Pets Poisoned by Marijuana a Growing, Expensive and Embarrassing Problem

Confessing that a pet may have munched on marijuana can be embarrassing, or even spark fears about possible penalties for animal owners.

But coming clean fast with a veterinarian is key to getting treatment that can save a pet’s life, and it’s unlikely an animal doctor would reveal confidential details of a patient’s case to law enforcement, experts told The Epoch Times.

With treatment, THC toxicity—a problem that’s sickening pets in exponentially growing numbers—is usually survivable. But the symptoms pets experience after eating marijuana can be terrifying, not to mention expensive, for owners, veterinarians say.

“It’s a problem that’s super-common and growing,” veterinarian Kelly Diehl, senior director of science and communication for the Morris Animal Foundation, told The Epoch Times. The 74-year-old foundation in Denver is the largest nonprofit dedicated to funding studies to improve and protect the health of companion animals and wildlife.

Marijuana is the dried material of the plant Cannabis sativa. Tetrahydrocannabinol (THC) is the plant’s natural compound that causes the “high” associated with marijuana use. It can be rolled and smoked like a cigarette, or packaged in a highly concentrated cartridge for vaping. Increasingly, THC is prepared for sale in edible treats: candies, cookies, gummies, butters and brownies, which seem especially appealing to the dogs and children that stumble upon them.

With many states legalizing medical and recreational marijuana, dispensaries and shops selling THC products and weed have been sprouting up around the country. In states where marijuana only can be purchased legally by people with a prescription for it, the herb is used in its variety of forms to combat a range of maladies, such as anxiety, post-traumatic stress disorder, lack of appetite, pain, and more.

That proliferation means accidental exposure in pets is increasing dramatically, according to the ASPCA Animal Poison Control Center. In the first couple months of 2019, the hotline saw a 765 percent jump in calls about pets accidentally exposed to THC. More recent data were not available.

Veterinarians and toxicologists staffing the 24/7 hotline routinely field calls from pet owners worried about all types of potential poisonings. The consultation fee is $75.

A pet that has eaten marijuana often will act dazed, confused, depressed, and disoriented. The pet may stumble or have difficulty maintaining balance, with glassy eyes and dilated pupils.

After ingesting marijuana, a pet likely will act lethargic, but might also bounce around hyperactively. The pet may make sounds, and may drool or vomit. Heart-rate may dip too low, or be too rapid, and body temperature may drop. Tremors, aggression, seizures, and even coma can occur.

Even with milder symptoms related to eating marijuana, high-tailing it to an animal clinic with your pet at the first sign of exposure is critical.

“Every second counts” when a pet shows those symptoms, because the animal actually may have ingested a deadlier toxin, such as anti-freeze, Diehl said.

Pets can have similar symptoms when sick after ingesting alcohol or human medications such as opioids, sedatives, and antidepressants. Veterinarians are seeing a rise in those cases, too, Diehl said.

A tip-off that the pet has ingested THC is loss of bladder control, Diehl said. That doesn’t usually happen with exposure to more dangerous toxins.

Letting a veterinarian assess and do testing to rule out a deadlier poisoning is critical.

“So don’t let your hesitancy stop you from getting treatment for your pet,” Diehl said. “You can’t just ignore it.”

Some pet owners express concern that a visit to the animal doctor for a pet’s THC toxicity could lead to trouble with the law in places where marijuana use isn’t legal, Diehl said,

But the circumstances of the pet’s condition would be considered “confidential information,” she said. “And I would say most vets are pretty non-judgmental. We just need to take care of the patient and be patient focused.”

“The good news,” she added, “is that [THC toxicity] is rarely fatal.”

Still, pets often need supportive care to pull through after ingesting marijuana, Diehl said. That may involve fluids for hydration, warmth, and medication to regulate the heart and body temperature. An affected pet also may need close supervision to avoid being injured while in a disoriented state.

Especially in smaller animals, ingestion of marijuana can cause “big problems,” she said.

The smaller the patient, the greater the risk.

Then you’re starting to talk about a financial hit for the owner,” Diehl said. “You can run 1,000 bucks easy. Maybe less, though, if you can go to your general practitioner. An after-hours clinic will be more.”

Counter-surfing dogs seem most at-risk for downing tasty marijuana baked goods. And when they chow down on THC edibles also containing chocolate or the sweetener xylitol, the poisoning quickly can turn deadly. So people who keep those items at home must be careful to keep them well out of their pets’ reach.

It’s a problem that can strike pets belonging to people who don’t use marijuana, as well. Dogs sometimes pick up discarded vape cartridges containing highly concentrated THC while out on walks.

Cats have a more discriminating pallet and seem to prefer nibbling buds from marijuana plants, so they’re less at risk, vets say.

Though it doesn’t cause a “high” like THC, the natural compound cannabidiol (CBD) in  marijuana also can cause problems for pets. Though it’s not FDA-approved, CBD is marketed extensively for human use to help alleviate pain and anxiety and many other conditions. So it’s found in many homes. There also are synthetic cannabinoids (SCB) are much more potent than traditional marijuana, and these can cause severe cases of toxicity in pets.

Pets also can be exposed through a second-hand-smoke “contact buzz” from marijuana cigarettes, Diehl said.

“But that’s not funny,” she said, and could be fatal. “Never, never, never give marijuana to your pet because you think it’s funny.”