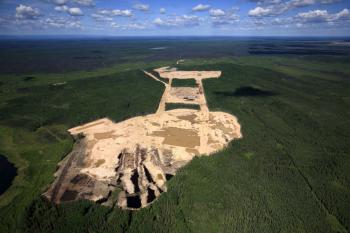 By John Buchanan
Print
Shot primarily from a helicopter, film-maker Peter Mettler's Petropolis: Aerial Perspectives on the Alberta Tar Sands offers an unparalleled view of the world's largest industrial, capital and energy project. With the current event of history’s largest oil spill still unfolding, its timing could not be more poignant.

Canada's tar sands are an oil reserve the size of England, so massive that filming them in any other way could not clearly expose the enormity of their devastation. Extracting the crude oil bitumen from underneath unspoiled wilderness requires a massive industrialised effort with far-reaching impacts on the land, air, water, and climate.

The film approaches the subject from the air, somewhat like an alien spaceship coming to check out earth for the first time. We float above Alberta’s beautiful natural landscape as lines of data pop up on screen explaining the process of oil extraction. All the while in the background a gentle Eno-esque soundtrack plays in tune with the whirrs and clicks of the spaceship’s camera as it unveils the devastation below. Minimal editing is employed to great effect with long sweeping shots, zooms, tilts and pans revealing enormous machines working within vast destruction stretching off to the horizon.

Irony is prevalent throughout: a gas guzzling helicopter used to film the very destruction that its fuel causes; the awesomely hellish and toxic landscape that is captured so beautifully; the revealing of a terrain alien to most earthbound audiences.

For those that have seen Baraka or Koyannisqatsi, Petrolpolis will seem familiar, albeit smaller in scale. This is not a slight on the spectacle that Mettler has created, because Petropolis can indeed be placed alongside such socio-environmental visual narrative masterpieces.

The title suggests another Age of Stupid or Crude, full of shocking exposés and facts about the energy industry’s lack of regard for the environment. But Mettler has created something very different, virtually free from narration, pithy sound bites, enlightening interviews or a mass of animated facts. We are left with the stark reality in plain unadulterated sight: shock and awe, disgust and scorn.

Petropolis is a subtly brutal documentary, kind of like being beaten with a velvet hammer.