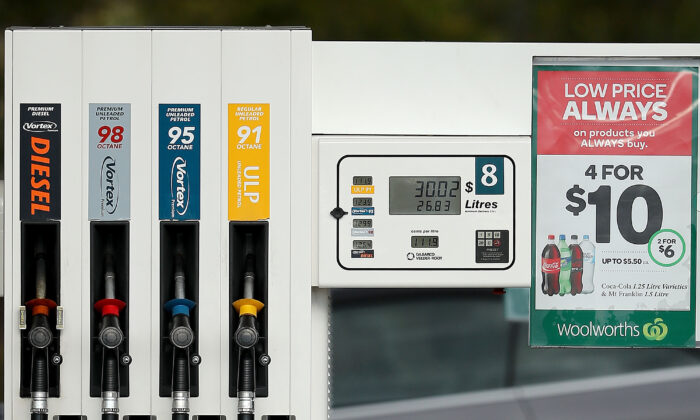 A general view of a fuel dispenser at a Caltex Woolworths petrol station in Melbourne, Australia, on Aug. 10, 2017. (Scott Barbour/Getty Images)
Australia

Australian petrol prices have started to lift again ahead of the expiry of the fuel excise tax reduction in September.

Data from the Australian Institute of Petroleum showed that while wholesale petrol prices dipped by 2.6 cents a litre (6.8 U.S. cents a gallon) across Australia in the week ending Aug. 21, the national average retail price climbed by 3.6 cents to $1.72 a litre.

The increase contrasted sharply with the downward trend in petrol prices observed in the previous weeks.

According to CommSec chief economist Craig James, the end of fuel cycles in some major cities was driving up the national retail prices.

As Brisbane and Melbourne reached the top of their fuel cycles in the week ending Aug. 21, motorists in the two capital cities had to pay $1.82 a litre and $1.72 a litre at the pump, respectively.

On the other hand, Sydney was halfway through its petrol-price peak and Adelaide and Perth were still at the start of their fuel cycles, which caused petrol prices to stay at lower levels in some areas in these cities.

And compared to the June peak, average petrol prices across the country were still 25-50 cents a litre lower.

In addition, National Roads and Motorists’ Association Peter Khoury said diesel prices were starting to drop despite being more stubborn than unleaded petrol.

He also said that while the oil market was “completely chaotic” as the Russia-Ukraine war continued to limit global supplies, the demand for oil had dropped because of concerns about the cooling global economy and China’s COVID-19 measures.

Australian motorists are expected to see more price hikes when the fuel excise tax returns to normal after Sep. 28.

Previously, the then Coalition government halved the fuel excise tax by 22 cents per litre in late March to deal with soaring petrol prices.

After coming into power following the May federal election, the Labor government has committed to reinstating the tax in full, saying that it would be too costly to extend the policy considering the debts built up during the COVID-19 pandemic.

The news of petrol price hikes came as Australia’s largest integrated petroleum company Ampol reported a surge in profit despite the energy crisis.

The company’s net profit soared to $695.9 million in the six months to June 30, an increase of 114 percent compared to the previous half financial year. Additionally, its total sales volumes rose to 11.5 billion litres.

The company did not rule out a future share buyback but said it would weigh the option against the need for further investments.