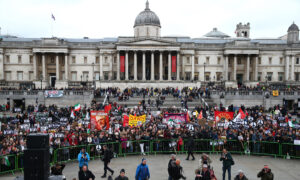 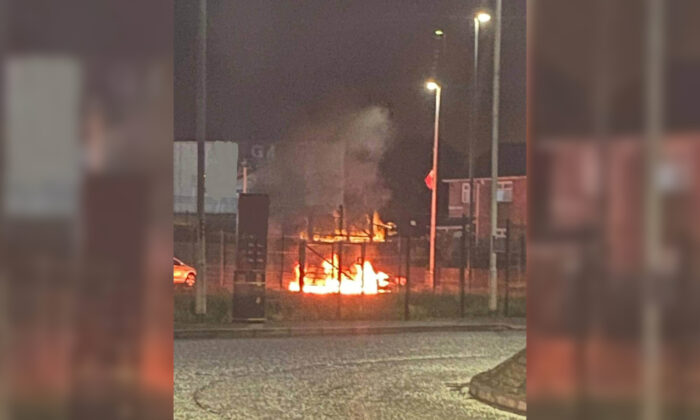 Damage caused after a gang of up to 30 people, including masked men, threw masonry and petrol bombs during a night of disorder in Co. Tyrone, Northern Ireland, on Aug. 7, 2021. (Police Service Northern Ireland/Handout via PA)
UK

Petrol Bombs Thrown During Night of Disorder in Northern Ireland

A gang of up to 30 people, including masked men, threw masonry and petrol bombs during a night of disorder in the Northern Irish County of Tyrone.

Police are investigating a number of incidents that happened in Dungannon on Saturday night.

From around 10:40 p.m. to around 2:30 a.m., a number of reports were made about incidents in the Ballygawley Road area.

It is believed approximately 20 to 30 people, including a number of masked individuals, were involved.

Two police vehicles were damaged after a petrol bomb and other missiles were thrown.

In one of the incidents reported, a petrol bomb was also thrown at a car being driven by a member of the public.

Police say that furniture was also set on fire on a street to block passing traffic.

Inspector Knipe from the Police Service of Northern Ireland (PSNI) said the scenes on Saturday night were “disgraceful.”

“We are thankful that no one was injured. What happened last night is completely unacceptable and cannot be tolerated,” Knipe said, adding that local residents were “horrified by the incident.”

“The community wants better for their area and to live without fear,” Knipe said.

“We appeal to those who think this behaviour is acceptable to take a look at what destroying your own community achieves. This and putting the emergency services under even more pressure is not the way forward.”

Kipe said PSNI will continue to monitor the area and appealed to witnesses to contact the police.

“Disgraceful behaviour in Dungannon last night with republicans rioting,” he said in a social media post.

Cuthbertson said he would be talking to senior police in relation to the incident.

“The Unionist community will be watching closely for what action, if any, the police take,” he wrote.

“All to [sic] often it looks as if a blind eye is continually shown to this violence in Dungannon, while a different, more heavy style of policing, is deployed against anti [Northern Ireland] protocol protests.”