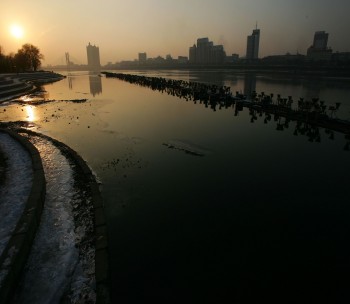 The Songhuajiang River is seen on January 19, 2007 in Jilin City of Jilin Province, China. The River was polluted after an explosion at a chemical plant November 13, 2005. (China Photos/Getty Images)
China

By Jin Jing
biggersmaller
Print
After an enormous benzene spill five years ago in the Songhua river, the cleanup cost of $1.2 billion has been passed on to the taxpayer.

The company that spilled the benzene is a subsidiary of the state-owned China National Petroleum Corporation (PetroChina). Critics are saying PetroChina should be paying for the cost of the cleanup, not the public, and that the case again illustrates collusion between the Chinese regime and large state-owned enterprises, which is always to the detriment of the commonweal.

After the explosion at Jilin Petrochemical Company, a subsidiary of PetroChina, regions surrounding the Songhua River began taking action. Heilongjiang Province set aside a special emergency fund of ten million yuan, and the city of Harbin, capital of Heilongjiang Province, shut off the city’s water for many days, as did the city of Shongyuan in Jilin Province, a Securities Daily report on June 7 said.

To this day, the spill continues to affect water quality.

According to the Securities Daily report, PetroChina donated a mere five million yuan (US$772,140) to the Jilin provincial government to help with pollution control. It also paid a one million yuan (US$154,428) fine to the Ministry of Environmental Protection.

However, in 2006, the central government approved and implemented the Songhua River Basin Water Pollution Control and Prevention Program, encompassing 222 pollution control projects. The total price tag was to be around 13.4 billion yuan (US$2.1 billion) in taxpayers’ money.

The affair came to the public’s attention again recently after China’s Ministry of Environmental Protection posted a statement on its website on June 1 saying since the major Songhua River pollution incident in 2005, the government has already spent a total of 7.84 billion yuan (US$1.2 billion) in public funds on cleanup.

An additional statement by Zhou Shengxian, the Minister of Environmental Protection, and reported by Caijing magazine on June 2, indicates that a lot more money may be needed. Zhou said the measures haven’t done much to help.

Claims of such huge public spending caught the media’s and general public’s attention.

Mr. Xu, the chief editor of PubCHN.com, a website that covers environmental topics and which was later apparently taken offline, told The Epoch TImes: “Those who pollute should be responsible for the cleanup, which is the common international practice. PetroChina’s outsider attitude is not acceptable. State enterprises with such huge capacities should be more socially responsible.”

One environmental activist from Beijing, who asked to remain anonymous for fear of retaliation, told The Epoch Times: “PetroChina and China’s state government belong to the same interest group; they’re in the same family. From the point of interrelationship, PetroChina is the inner circle member, and local governments are the weakling members. When core interests are at stake, local entities will often become the scapegoats.”

Professor Zhou Ke, a specialist in environment law from People’s University of China, told Securities Daily on June 3: “In the U.S. or Mexico, if a listed company has caused such a major environmental disaster, its compensation payments would be astronomical. The company should bear the majority portion of compensation, and tax payers should not pick up the bill.”