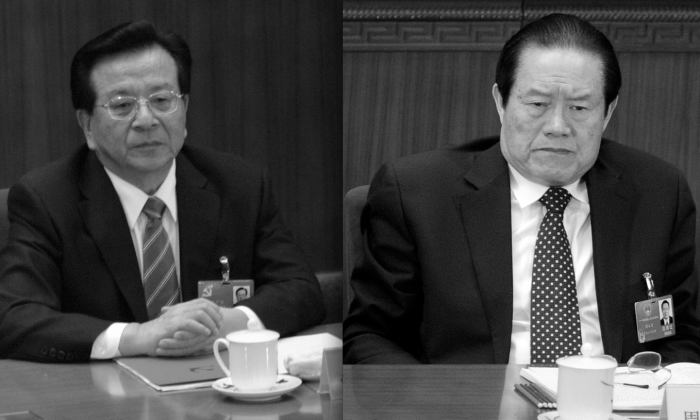 (L) Zeng Qinghong on March 9, 2006 in Beijing, China. (R) Zhou Yongkang, a member of the Standing Committee of the Political Bureau of CPC attends the opening session of the National People's Congress (NPC) at the Great Hall of the People in Beijing on March 5, 2012. (Liu Jin & Andrew Wong/AFP/Getty Images)
China

HONG KONG—No sooner had the trial of disgraced former Politburo member Bo Xilai come to an end, than investigations of current and former top officers of PetroChina were announced. Those named are being referred to in the Chinese Communist Party’s press as “tigers”—top Party officials, but the real targets are likely to be individuals who were recently among the most powerful figures in the CCP.

On Sept. 1, regime mouthpiece Xinhua announced that Jiang Jiemin, currently the director of the State-Owned Assets and Supervision Commission, but until recently the CEO of PetroChina, was under investigation. Jiang is the first member of the Party’s elite Central Committee—the body composed of the top 350 members of the CCP—to be targeted in the round of corruption investigations launched by Party head Xi Jinping.

The week prior, four top executives of PetroChina were put under investigation. On Sept. 3, Hong Kong-listed Wilson Engineering Services Co. Ltd. announced its chair and controlling shareholder, the billionaire Hua Bangsong, was assisting in the investigation into corruption at PetroChina.

In the past, a large part of Wilson Engineering’s business has been done with the state-owned oil giant. According to media reports, the boss behind the scenes at Wilson Engineering is the son of former domestic security tsar Zhou Yongkang, Zhou Bin.

On Sept. 3 the Party mouthpiece Guangming Daily celebrated the investigations into PetroChina, also known as the China National Petroleum Corporation (CNPC), with the headline “the investigation of CNPC is an unprecedented case of netting ‘tigers.’”

On the news of the PetroChina probe Western media outlets and Chinese-language outlets outside China pointed at Zhou Yongkang as the target of the investigation.

Before rising to the head of the Political and Legal Affairs Committee (PLAC) that commands almost everything having to do with China’s legal system and domestic security, Zhou Yongkang was Party chief in Sichuan Province and, before that, a top Party official in the petroleum industry.

As a member of the Politburo Standing Committee and head of the PLAC, Zhou commanded what commentator Zhang Tianliang has referred to as a “second center of power” in the CCP. He was for years at least the third most powerful person in the Party prior to his stepping down from his posts during the leadership change in November 2012.

The New York Times quoted a former anti-corruption investigator as saying that the “Central Commission for Discipline Inspection has set up a special investigating team to handle the case of Zhou Yongkang.”

A former China News Service reporter in Beijing, Gao Yu, said of the PetroChina probe, “It is a firm anti-corruption campaign, an investigation to the end.”

“This time it is surely pointing at Zhou Yongkang,” Gao Yu said.

An editorial in Hong Kong’s Open Magazine said, “High-ranking officials of the CCP decided to investigate Zhou Yongkang at their meeting in Beidaihe early this year.”

The editorial explained the probe aimed at first trimming off Zhou’s supporters, “then it will be good to aim at Zhou Yongkang.”

“Zhou is surely a tiger and beneath him there is a pride of tigers,” said Gao Yu. “There was nothing underneath Bo Xilai as he did not form corruption groups.”

“However, Zhou Yongkang formed a number of such groups including cohorts from Sichuan Province and the CNPC group,” Gao Yu said. “It may also be possible for the authorities to identify a group from within the Political and Legal Affairs Committee (PLAC) where he was in charge for ten years. The PLAC was involved in many evil deeds over that period of time.”

Before Zhou Yongkang climbed the ranks in China’s petroleum industry, the CCP powerbroker and former vice-chair of the CCP Zeng Qinghong got his start there. It was Zeng who brought Zhou along in the industry.

In 1980 Zeng Qinghong was the secretary to Yu Qiuli, the Chairman of the National Energy Commission and Zeng managed the oil business for years. As a member of the Politburo Standing Committee, Zeng pushed his PetroChina executives into top political positions.

As head of the PetroChina group, Zeng Qinghong and his family have controlled the oil, energy and chemical sectors in China. His son, Zeng Wei, has been in the oil business, and the family has assets in the tens of billions of US dollars.

On Aug. 31, Hong Kong’s Ming Pao newspaper reported that Central Party leaders gave the instruction that no matter who the probe reaches, they should be investigated all the way to the end.

At the conclusion of a Sept. 2 article on the PetroChina investigations, Ming Pao said the probe will “perhaps even go against Zeng Qinghong.”

The U.S.-based commentator Xia Xiaoqiang said the Ming Pao comments can be seen as a warning from the high ranks of the CCP to Zeng Qinghong, who is generally considered to be the mastermind behind the political activities of the faction centered around former regime leader Jiang Zemin.

Xia Xiaoqiang said that it is unlikely that CCP high command would handle Zhou Yongkang and Zeng Qinghong at the same time. Party Central is telling Zeng not to make any reckless moves while they concentrate on other issues, Xia said.

Hong Kong’s Open Magazine pointed out that all the issues raised by the PetroChina probe are related to Jiang Zemin, because all of the leaders of PetroChina were supported by Jiang.

Open Magazine wrote, “For self-protection, Jiang would give up and sacrifice his subordinates He is helpless to support Zhou Yongkang.”