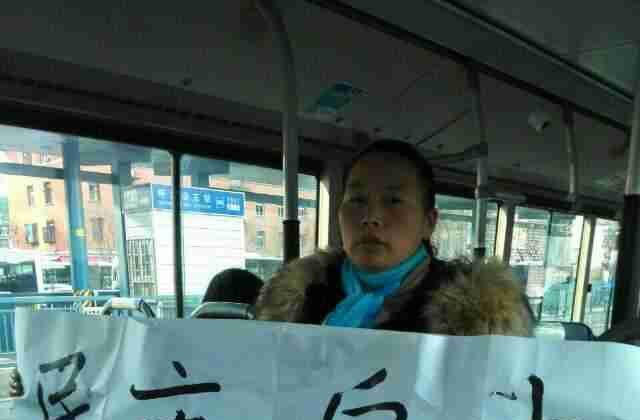 Petitioner Wang Fang from Hubei Province holds a banner saying “Democracy, freedom, human rights, constitution” on a bus she was placed on by police in Beijing, on Dec. 4, 2014. It was China's newly established "Constitution Day," but thousands of aggrieved petitioners found little to celebrate. (New Tang Dynasty Television)
China

The Communist Party’s rubber-stamp legislature established Dec. 4 this year as China’s inaugural “constitution day,” supposedly a chance for the country to celebrate the Party’s establishment of a rule-based society.

Try telling that to the petitioners—that is, disenfranchised individuals who believe they have been wronged by the Communist Party, and then try their luck by traveling to the capital for redress—who streamed into Beijing from around the country recently.

They came to express their grievances at what they say are the injustices of the judicial system, and called for the rights granted to them in the constitution to be granted in reality.

In reality, they were roughed up, arrested, thrown in buses, and taken away.

At around 10 a.m., seven former police officers from northern China’s Heilongjiang Province attempted suicide in front of Zhongnanhai, the central headquarters of the Chinese Communist Party (CCP) in Beijing, after their protest was interrupted by police.

Police took their banners away when then attempted to put them up and then, frustrated at their long unresolved grievances, the seven men drank pesticide they brought along. They were taken to hospital.

The seven protesters served as police officers for between 10 and 20 years before they were forcefully laid off, one of the men, Sun Xiongli, told Radio Free Asia, after he woke up in hospital. Sun said that he has had no proper income, health insurance, or living allowance for 10 years after being laid off.

“The provincial public security bureau doesn’t even let us in now,” Sun said, about their failure to find anyone who will listen to their complaints.

Besides Zhongnanhai, many petitioners also gathered in front of the state-run Central Chinese Television, the State Bureau for Letters and Calls, Tiananmen Square, and elsewhere. Those demonstrations, too, were soon wrapped up by rough security guards and police officers.

Zhang Jixin, a human rights activist from from Changchun City of northern China’s Jilin Province, told NTD that she went to CCTV at around 8:30 a.m, and was soon captured by police. She was put on a large bus with many other petitioners, and sent to Jiujingzhuang, a massive extrajudicial detention facility in a suburb of Beijing.

“Many police guard the train station at the TV station. A lot of petitioners were immediately taken away by police when they got off the subway,” Zhang said.

“We’re like a person who has fallen into a river. He’ll even grab onto a piece of straw if there were any. We clearly know that the straw doesn’t have any effect, but we still want to try it,” rights defender Yin Xu’an from Hubei Province told New Tang Dynasty Television, referring to their invocation of the constitution as a guarantor of their rights.

“In fact, we have no hope in the whole regime. Many of us are not here to petition today, but to participate and to see whether the constitution would actually be followed.”

China’s constitution guarantees citizens freedom of expression, assembly, and a host of other rights that are violated regularly by the Party’s security forces.

A rights defender from Hubei Province, Wang Fang, said, “We can’t let the constitution just be a piece of paper, or be something to show foreigners. Every citizen should fight for our rights… No matter if our efforts work or not, we should do it.”

Wang Fang continued: “We understand that ‘if you don’t stand up today, you may not be able to stand up tomorrow.'”