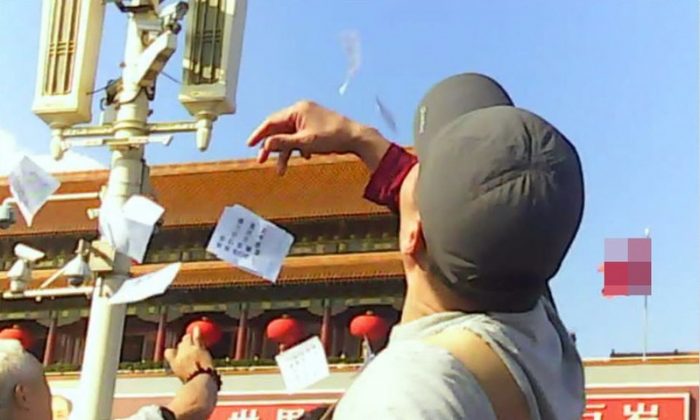 On Oct. 1, 64th anniversary of the People's Republic of China, petitioners came to Tiananmen Square to make known their grievances. They scattered about 3,000 flyers in four waves between 4 and 5:30 p.m., according to witnesses. (Courtesy of sources)
China

Petitioners Descend on Tiananmen Square for ‘National Day’ in China

Tiananmen Square was especially noisy this Oct. 1 as petitioners from provinces across China gathered to make their grievances known to the authorities. Petitioners converged on the square in waves, marking the 64th anniversary of the People’s Republic of China with voices of dissent and thousands of pamphlets.

Gu Guoping, a human rights activist working in Shanghai, told Epoch Times what he saw: “In just one and a half hours, from 4 p.m. to 5:30 p.m., on Oct. 1, I witnessed four waves of petitioners. People were scattering flyers and chanting slogans in Tiananmen Square. About 2,000 to 3,000 copies of flyers were scattered.”

Surprised tourists asked him why so many people were scattering flyers.

“They are petitioners. As they have nowhere to appeal, they have no choice but to stage the protests in Beijing,” Gu replied.

“After an old woman threw her flyers,” Gu said, “many police and armed police immediately rushed out to collect the flyers and pulled her into a police car. We walked at the east side of Golden Water Bridge and saw many petitioners throwing flyers.”

At about 4:20 p.m., 74-year-old Guo Longying, his son Hu Jianguo and 9 other petitioners threw a total of about 2,000 copies of flyers pouring out their complaints against the regime at the East of Tiananmen Square. Guo Longying was the first to enter the bus station located at the east side of the Tiananmen Square, scattering 200 fliers among eight public security vehicles parked there.

According to Gu Guoping, the petitioners shouted slogans such as “Down with Corruption,” “Overthrow Corrupt Officials,” “Corruption in Shanghai’s Judiciary,” “Give back my Land,” “Return my Property,” or the simple and plaintive “Innocent, Innocent.”

Around the same time, Tan Mingqi, Fan Miaozhen, and other petitioners from Shanghai were blocked by public security at a checkpoint guarding the east side of Tiananmen Square. In one scene, over 10 plainclothes police officers desperately tried to pull Tan Minqi into a police car as he shouted his appeals at the top of his lungs.

“We waited for this day. Many people would come to Tiananmen Square from Shanghai to spread flyers,” Tan Mingqi said. “When the square was packed with people … we wanted to let the general public know more about the truth that our people are living in dire straits, as opposed to the so-called ‘harmony’ fabricated by the authorities. I chanted, ‘The rogue government is oppressing the people.’ It was a cry from the bottom of my heart.”

With Translation by Frank Fang and Bill Xu.