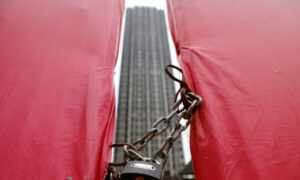 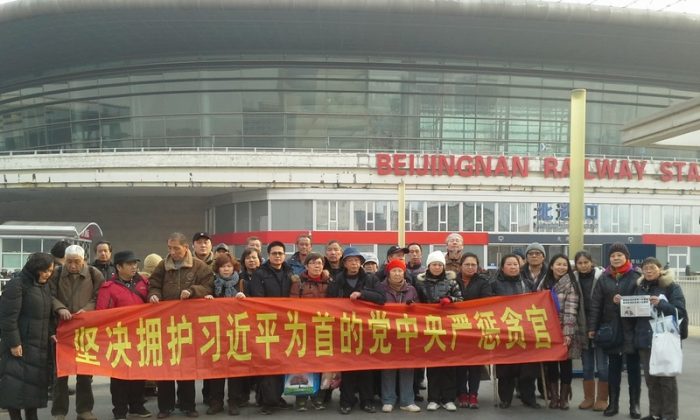 Petitioners who have come to Beijing to seek redress of grievances raise a banner that reads, “We firmly support the Party Central Committee, headed by Xi Jinping, in punishing corrupt officials” in front of the Beijing South Railway Station on Jan. 24, 2014.(Human Rights Campaign in China)
China

While the Chinese New Year is traditionally a time when Chinese travel home to be with their families, the week before New Year’s day saw more than a thousand petitioners come to Beijing from various provinces.

The petitioners brought their stories of abuse by officials and corruption to the three main bureaus set up for hearing complaints—the State Letters and Complaints Bureau, the Letters and Visits Bureau of the National People’s Congress, and the Central Discipline Inspection Commission Complaints Bureau.

On the afternoon of Friday, Jan. 24—one week before New Year’s Day, which falls this year on Jan. 31—the streets around these bureaus were packed with people. Also packing the streets were the police sent there to arrest them.

According to Wang Zaiming, a petitioner from Shanghai, police cars were parked all along the streets as well as buses waiting to take petitioners to Jiujingzhuang, a centrally located “black jail.” Black jails are places of detention in China that don’t show up in any official records. Police detain individuals in them without the benefit of any formal arrest or court hearing.

Jin Yuehua, another petitioner from Shanghai, said, “Among the 2,000 to 3,000 petitioners from different areas across the country to Beijing, nearly 1,000 petitioners came from Shanghai. There were a dozen buses outside the petitioning bureaus. By 5:00 in the afternoon, Beijing police and the people who were going to stop Shanghai petitioners from appealing had already been waiting there. They forced us onto the buses and dragged us to Jiujingzhuang.”

“Year after year, day after day, we all dejectedly and miserably travel to Beijing to petition, but the problem still has not been resolved,” she said. “With disappointment and anger, we persist in our protest, raising banners and shouting slogans, at Beijing’s three main petitioning bureaus. We hope the Party’s leaders will severely punish corrupt officials and resolutely eliminate the black sheep of the Political and Legal Affairs Committee.” The Political and Legal Affairs Committee is in charge of almost all matters having to do with the police, courts, and prisons in China.

Also on Jan. 24, police broke in on a group of Christians who had gathered to read the Bible in a home in Beijing. The police dragged 14 of the Christians off to a local police station for interrogation.