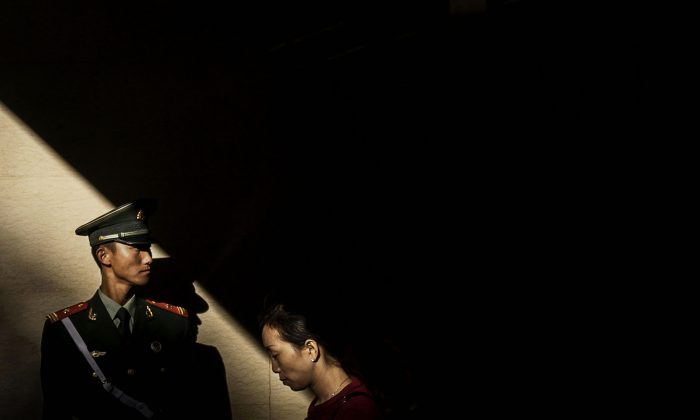 With just days left to the 19th National Congress, the Chinese Communist Party (CCP) is set on silencing any possibility of dissent, with petitioners recently getting extra attention.

Held every five years, the Congress will unveil the next round of top leadership in the Party.

Petitioners—citizens who have grievances that they wish to bring up to the central authorities—have told The Epoch Times that in recent days, plainclothes men have appeared on local streets, monitoring the area.

Petitioner Liu Huizhen from the Fangshan District of Beijing said: “Many petitioners in Beijing are being followed. Very few petitioners from out of town are left, as they all have been forcibly sent back home by the authorities.”

Liu is petitioning because her home was forcibly demolished by local authorities.

She described about 30 plainclothes agents wearing red scarves (a typical uniform element of the CCP) and loitering in the streets near her home. “At midnight on Oct. 1, I got up from bed to see what was going on. There were two of those guys outside my house with flashlights trying to peer inside. I was terrified.”

Another petitioner informed The Epoch Times that last week, when she attempted to submit a letter of complaint to the CCP’s State Bureau for Letters and Calls website—a state department for hearing grievances from the public—the online system continuously returned an error message. She was unable to submit the letter even when she tried on different computers.

Last week, a video that spread widely on the Chinese internet showed a group of petitioners jumping out from a bus. A petitioner from Inner Mongolia who was on the bus, Ma Bo, told The Epoch Times that the group was arrested by police on Oct. 4 and was being driven to a black jail in Jiujingzhuang, Beijing, known as a detention center for petitioners.

Some petitioners were arrested as soon as they swiped their ID cards at the subway station or bus station, Ma said.

There were over a dozen petitioners on the bus. When one of them stuck her legs through the window and jumped out of the bus to avoid arrest, the rest of the group followed. The two police officers in the background watched as everyone escaped from the vehicle.

Ma told The Epoch Times that the police informed her arrests of petitioners will intensify after Oct. 8. Local authorities are also rewarding members of the public for handing over petitioners to police, with 1000 yuan (about $150 USD) as compensation.

Ma said that the day after the arrest depicted on the video, all the petitioners, who came from different parts of the country, were forcibly sent back to their hometowns. Ma was placed under house arrest at a hotel in Beijing.

Radio Free Asia also reported that a group of human rights activists from Guizhou Province were forced by local police to leave town and go on vacation. In recent years, this has been a common tactic for authorities to dissuade dissidents from voicing their protest. The phenomenon is so common that there is a term for it: “being vacationed.”

Li Xi and Gu Xiaohua contributed to this report.