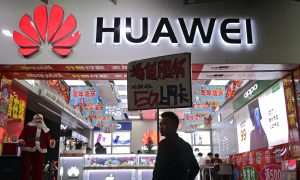 Huawei and 5G: To Ban or Not to Ban
0
Share Now
TelegramFacebookTweetEmailTellMeWeReddit
Copy Link

A petition calling on Prime Minister Justin Trudeau to ban Huawei from participating in the development of Canada’s 5G infrastructure has garnered more than 28,000 signatures in under three weeks.

Created on the website Change.org on Jan. 22, the online petition also gives people a chance to voice their concerns about the Chinese telecom company that has been making headlines constantly in recent months, particularly since the arrest of CFO Meng Wanzhou in Vancouver last December.

The petition states that Huawei is not an ethical team player and draws attention to the U.S. government and security officials who have warned against using the company’s technology due to the risk of intellectual property theft, whether it be state secrets or user data.

“FBI Director Christopher Wray, CIA Director Mike Pompeo, and Director of National Intelligence Dan Coats have all publicly stated several times that Huawei is using its technology to spy on companies with the objective of stealing its intellectual property,” the petition reads.

According to Wray, Huawei, which has close ties to the Chinese communist regime, poses a “dual threat to both our economic and national security, and the magnitude of these charges makes clear just how seriously the FBI takes this threat,” reported The National Review.

A Nanos poll commissioned by the Globe and Mail (pdf) released in January revealed that a majority of Canadians are critical of China’s “authoritarian rule” and are in favour of the arrest of Meng for extradition to the United States on charges of fraud related to international sanctions on Iran.

The poll found that 83 percent of Canadians have a negative or somewhat negative impression of the Chinese regime and Huawei, and more than one in two believe the regime poses a major national security threat to Canada.

In addition, 53 percent of Canadians think Canada should ban Huawei from providing 5G technology to build the country’s next-generation 5G networks, following the lead of the United States, Australia, and New Zealand.

Shortly after Meng’s arrest, which has infuriated Beijing, two Canadians were detained in China and a third who was serving time for drug trafficking was sentenced to death.

On the latter, former Canadian Security Intelligence Service director Richard Fadden had this to say in an op-ed published in the Globe and Mail:

“If China would resort to putting Canadians to death to defend its corporate national champion, what might it do if the Chinese Communist Party had unfettered access to Canada’s vital communications networks?”

Fadden went on to say, “There are plenty of reasons why intelligence professionals are alarmed by Huawei’s involvement in our 5G networks, particularly, the close relationship between Huawei and a Chinese government with a history of cyberespionage. Add the fact that China’s 2017 National Intelligence Law gives Beijing the power to compel Huawei’s support for its intelligence work, and it should be a clear-cut case.”

“The government should announce sooner, rather than later, that Huawei will be banned.”