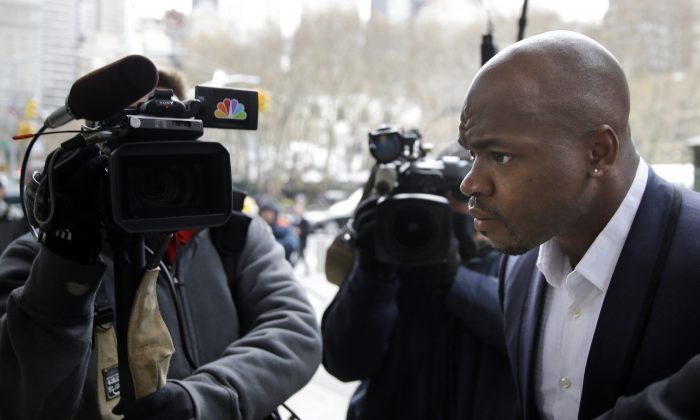 NEW YORK—Adrian Peterson did not testify at his appeal hearing Tuesday, according to a person familiar with the case.

Peterson gave a statement, said the person, who spoke to The Associated Press on condition of anonymity because neither side is discussing the case publicly.

Peterson left without comment after spending more than three hours at the hearing. His attorney, Jeffrey Kessler, said only that the hearing will continue Thursday.

The proceedings were held before longtime hearing officer Harold Henderson.

Peterson is seeking reinstatement after NFL Commissioner Roger Goodell suspended him for the rest of the season for violating the league’s personal conduct policy. Peterson will not be considered for reinstatement before April 15.

The 2012 NFL MVP hasn’t played for the Minnesota Vikings since Week 1 after he was charged with child abuse in Texas. He was placed on paid leave while the legal process played out, and he pleaded no contest Nov. 4 to misdemeanor reckless assault for injuring his 4-year-old son with a wooden switch.

The NFL Players Association called the punishment “unprecedented, arbitrary, and unlawful.” The union is arguing that Peterson should get credit for time served on the exempt list.

The NFLPA submitted a tape of a conversation between Peterson and Troy Vincent in which the NFL’s executive vice president of football operations tells Peterson he would be credited with time served and receive a two-game suspension if he attended a disciplinary hearing Nov. 14 with Goodell. Peterson skipped that meeting.

The union wants Henderson to compel Vincent to testify Thursday. Vincent testified in Washington on Tuesday before a Senate Commerce Committee hearing about domestic violence in professional sports.