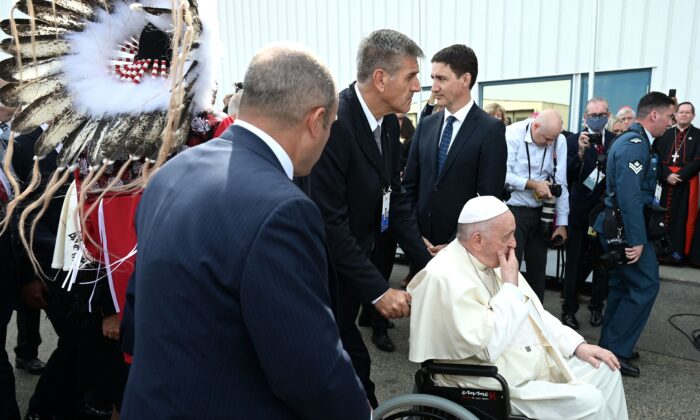 Peter Stockland: Pope’s Visit Should Not Be Used to Promote Intolerance of Catholicism

Philosopher Peter Kreeft is credited with the observation that by the late 20th century, anti-Catholicism had become the fashionable bigotry of the white-collar and intellectual classes.

The point was at least two-fold. One was that in an era of inclusiveness rampant on a field of diversity, being Roman Catholic was among the few identities still considered fair game for sneers, slurs, contempt, and manifold other manifestations of intolerance. A more subtle point was that the contemporary prejudicial variant differed in form, though not function, from the unfashionable, flagrant, no-popery fanaticism of earlier times.

Gone were figures such as the inflammatory Protestant preacher Ian Paisley, who contributed to 30 years or murderous civil strife in Northern Ireland with rabid denunciations of the “Purrrrrrppppple Whooorrrre of Rome” for its alleged sins and wickedness. They were replaced by practitioners of subtler forms of detestation for the Church of about 1.3 billion adherents worldwide. Abhorrence of Catholicism became less hoi polloi, more highfalutin, and so more skillfully submerged in the murk of progressive shibboleths.

Pope Francis’s pilgrimage across Canada this week has already brought the modern versions of old anti-papist animus bubbling to the surface. It will require minimal attention to detect them. Probably the easiest way is to just leave the CBC on while washing the dishes or clipping your cat’s toenails. (And no worries. The smell of sulphur will dissipate soon after you switch to another audio choice on your streaming device.)

Indeed, Francis was still four days away from arrival in Canada when the tax-funded state media juggernaut produced a story so rank with anti-Catholicism that it could have easily been mistaken for a Beaverton or Babylon Bee parody of CBC fashionable bigotry. The papal visit, according to the headline on a story from the CBC Quebec newsroom, will cause possible delays in medically assisted dying being delivered on time.

The fatal toxins required for medical homicides to take place in Quebec City hospitals turn out to be prepared and stored exclusively in a small town about 100 kilometres away. The road between will be blocked during the papal Mass at Sainte-Anne-de-Beaupré. Ergo, those nasty Catholics are up to their old underhanded tricks by bringing in the pope to thwart Quebecers’ legal right to be killed. In fact, it’s made clear, albeit deep into the condemnatory tale, that no medically administered homicides will need to be delayed because of Francis’s presence at Sainte-Anne.

“All people who should be able to access medical assistance in dying before, during and after the Pope’s visit will be able to do so,” the local health authority is quoted.

But, hey, why let reality intrude on fomenting a little more fashionable anti-Catholic hostility, right? Why bother to make clear that the Pope, an 85-year-old who can’t walk because of an injured knee, was invited, then vigorously pressured, to come to Canada to apologize on Canadian soil for the evil of the Indian residential school system? Why go to the trouble of saying the pontiff, here to serve the great good of indigenous reconciliation, cannot simply raise his hand and order Heaven to open the road?

Nah. It’s only the Catholics who are being lied about, and no one cared about them even when their churches were being burned down last summer. “Pope Sticks His Nose in Quebecers’ Right to Die”—that’s the CBC’s story and they’re sticking to it.

It’s a small piece of the larger lie, spread and diligently nurtured for the past year by the white-collar, intellectual, and media class, that the bodies of indigenous children who suffered the horrors of those residential schools have been found in “unmarked graves” at numerous sites in Canada. In truth, as research by Hymie Rubenstein, Terry Glavin, Nina Green, and Rodney Clifton, among others, has emphasized, not one single body of any child has yet been found in graveyards, unmarked or otherwise, near the former schools.

That doesn’t mean they aren’t there. Absence of proof is not proof of absence. But so far, no. None. To repeat otherwise is to perpetuate falsehood.

To repeat a known lie about an identifiable group is, at its most banal, the stuff of stereotype. But there is a point rapidly reached beneath the surface of stereotype, where the darkness of authentic bigotry is found. It’s a point that should be the source of serious self-examination for many people in this country, well beyond the solipsistic confines of the tax-funded state media juggernaut.

After the revelations of Catholic clerical sexual abuse scandals, after the establishment of its indisputable guilt in the residential schools debacle, no sane person would argue the Roman Church as an institution should be immune from criticism and calling to account. Pope Francis is here precisely to acknowledge those faults and seek forgiveness for them.

But the sins of the Church in no way justify the persistence of hostile prejudice toward Catholicism and Catholics. Intolerance is intolerance, bigotry is bigotry, no matter how concealed they might be in the fashionable camouflage of the white-collar, intellectual, and media classes.