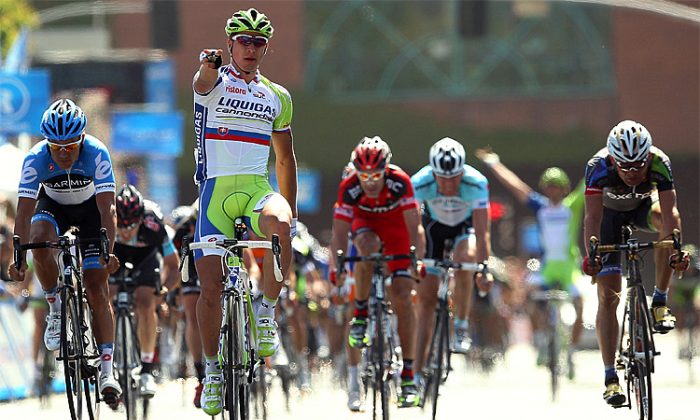 Peter Sagan of Slovakia, riding for the Liquigas-Cannondale team, celebrates after winning Stage One of the Amgen Tour of California. (Ezra Shaw/Getty Images)
Cycling

Liquigas rider Peter Sagan won Stage One of the 2012 Amgen Tour of California after recovering from a late puncture and avoiding an even later crash.

After a long chase to catch a seven-rider breakaway, which seemed like it might stay away, the peloton finally came together with seven kilometers left in the hilly 186-km stage. Seconds before the catch Sagan punctured a tire. The 22-year-old Slovakian champion coolly waited for his mechanic, knowing he was losing precious seconds but not letting it ruffle him.

Once he had his new wheel, Sagan rode furiously to rejoin the peloton, paced by teammates Ted King and Alessandro Vanotti. Halfway to the finish a crash decked his teammate King and several other riders. Sagan made it through, joined with his lead out man Daniel Oss, and charged past the Orica-GreenEdge team, which was leading the stage.

Sagan took a glance to survey the competition before leaving them all behind on his way to victory. It was his fourth career Tour of California stage win.