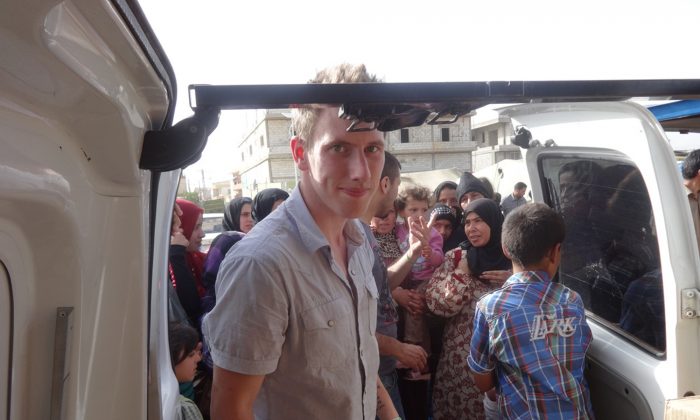 ABOARD AIR FORCE ONE—The White House on Sunday confirmed the death of U.S. aid worker Peter Kassig, a former soldier who tried to help wounded Syrians caught in a brutal civil war but ended up dying at the hands of Islamic State militants.

President Barack Obama, in a statement issued as he flew back to Washington after a trip to the Asia-Pacific region, said the group “revels in the slaughter of innocents, including Muslims, and is bent only on sowing death and destruction.”

With Kassig’s death, the Islamic State group has killed five Westerners it was holding. Britons David Haines, a former Air Force engineer, and Alan Henning, a taxi driver from northwest England, were beheaded, as was U.S. reporter James Foley and American-Israeli journalist Steven Sotloff. The group holds British photojournalist John Cantlie and a 26-year-old American woman captured last year in Syria while working for aid groups. U.S. officials have asked that the woman not be identified out of fears for her safety.

The U.S. confirmation about Kassig came after a review of an IS video released Sunday that purported to show extremists beheading a dozen Syrian soldiers and concluded with a militant claiming to have killed the American. The video ends with the militant standing over a severed head he says belongs to Kassig.

After his capture in eastern Syria on Oct. 1, 2013, while delivering relief supplies for the aid group he founded, Kassig had converted to Islam and took the name Abdul-Rahman Kassig.

Obama said Kassig “was a humanitarian who worked to save the lives of Syrians injured and dispossessed” by war.

The president said the 26-year-old Indianapolis man “was taken from us in an act of pure evil by a terrorist group that the world rightly associates with inhumanity.”

Obama offered prayers and condolences to Kassig’s family. “We cannot begin to imagine their anguish at this painful time,” he said.

Obama said IS “exploits the tragedy in Syria to advance their own selfish aims” and that Kassig was “so moved by the anguish and suffering” of Syrian civilians that he plunged into a relief mission.

“These were the selfless acts of an individual who cared deeply about the plight of the Syrian people,” Obama said in his statement.

The Islamic State group’s actions “represent no faith, least of all the Muslim faith which Abdul-Rahman adopted as his own,” Obama said. “Today we grieve together, yet we also recall that the indomitable spirit of goodness and perseverance that burned so brightly in Abdul-Rahman Kassig and which binds humanity together, ultimately is the light that will prevail over the darkness” of IS.

The Islamic State group has beheaded and shot dead hundreds of captives — mainly Syrian and Iraqi soldiers — during its sweep across the two countries, and has celebrated its mass killings in extremely graphic videos.

Kassig served in an Army special operations unit in Iraq and after he was medically discharged, he formed an aid organization in Turkey to help Syrian refugees.