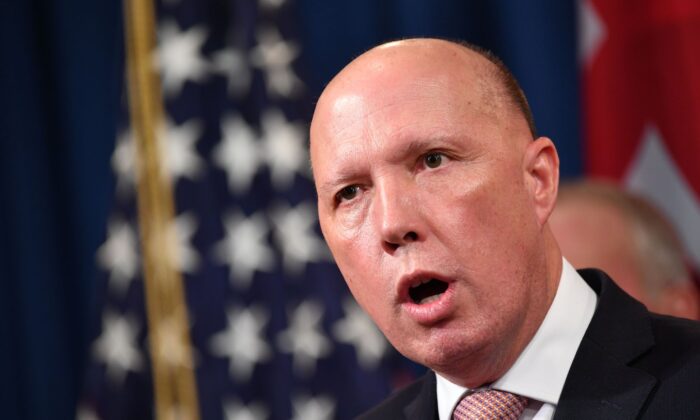 Australia's Minister for Home Affairs Peter Dutton during a press conference at the Department of Justice in Washington, on March 5, 2020. (Mandel Ngan/AFP via Getty Images)
Australia

Former Defence Minister Peter Dutton will become the next leader of the Liberal party after being elected unopposed, while former environment minister Sussan Ley will become his deputy.

During his first press conference as the Liberal leader, Dutton said his policies will be “squarely aimed at the forgotten Australians” in the suburban areas, after inner-city voters abandoned the Liberal party to vote for teal independents who advocated for climate change actions.

While Dutton said he will not be giving up on any seats, he noted the Liberal policies will be targeted at “those people who understand the Liberal party is the best when it comes to economic management.”

“Under my leadership, the Liberal Party will be true to our values, that have seen us win successive elections over the course of the last quarter of a century,” he said.

The 51-year-old opposition leader said the centre-left Labor government “weren’t ready to govern” as they are already “breaking promises and foreshadowing policy shifts.”

“This election was a pox on both your houses, there is huge hesitation around Anthony Albanese … whether he is up to the job.”

“Australians understand this, the next three years under Labor is going to be tough for the Australian people.”

“As Prime Minister, you need strength of character and relentless resolve to see our country through the good and the bad times. They are among the character traits that I bring to this job.”

The former home affairs minister and former police officer also pointed to his humble background growing up in the suburb while expressing his dedication to public services and the protection of children and women.

Asked about his position on China, Dutton said China under President Xi Jinping is “the biggest issue our country will face in our lifetime.”

“That’s the assessments of the American, British, Japanese, Indians and it’s our assessment as well,” he said, noting that he will support policies that help to defend Australia such as rolling out AUKUS.

Former Prime Minister Scott Morrison, who is stepping down as Liberal leader after losing the federal election, congratulated Dutton and Ley on their new positions. Morrison described the pair as ‘incredibly experienced, well versed” and “deeply committed Australians to both the Liberal cause and the cause of the nation.”

“I think they’ll do an outstanding job and I look forward to giving them all of my full support,” he said.

Morrison added that the party members “are all very sad” that Former Treasurer Josh Frydenberg couldn’t return after losing his seat of Kooyong to teal independent Monique Ryan.

Newly elected Prime Minister and Labor leader Anthony Albanese on Sunday said if Dutton is elected he would congratulate him as being the leader of the Opposition is “no easy task.”

The PM revealed he had “a much better relationship” with Dutton than he had with Scott Morrison, adding that Dutton “has never broken a confidence that I’ve had with him.”

Meanwhile, the Greens have slammed the appointment, saying his ascension to the leadership signals that the Liberal party is in tatters which shows the party is moving further towards the right.

“Peter Dutton’s record speaks for itself: he boycotted the national apology to the Stolen Generations, he voted consistently against same-sex marriage, he joked about water lapping at the door of our Pacific neighbours facing the impacts of climate change, and engaged in false fear-mongering about ‘African gang violence,’ Senator Mehreen Faruqi said in a media release emailed to The Epoch Times.

“While the rest of the Parliament works to tackle the climate crisis, restore integrity and address inequality, we expect Mr Dutton to accelerate the Liberals’ descent into irrelevance.”

Dutton, a hardline conservative within the Liberal Party, wrote in a Facebook post that he hoped the Australian public could see the rest of his character other than the tough side while vowing to unite the centre-right Liberal party.

The Liberal Party’s shift of focus to working-class Australians follows similar trends globally, where centre-right parties in the United Kingdom and the United States have seen their voter base change from wealthier and more educated voters (who have shifted left on the political spectrum), to the blue-collar worker.

While the inner-city was an onslaught for the defeated government, the regional seats and outer suburbs yielded vastly different results.

Seats like Gorton, outside of Melbourne, saw the Labor Party lose 10 percent of its primary vote and a preferential swing to the Liberal Party of 4.5 percent.

Eric Louw, retired professor of political communication, has also warned that the Labor government could see the “teal” and Green wave turn on the centre-left party.

“The Climate 200’s achievements will empower left-leaning individuals to become teals themselves, re-energise the existing Greens Party, and encourage the woke-green wing of the Labor Party,” he wrote in The Epoch Times.

“Prime Minister Albanese will face pressure from all three fronts to move progressively green. Yet, further moving to the left will create dissatisfaction with Labor’s right faction. This will create opportunities for both Dutton and the right-wing One Nation party to pull votes from Labor’s right flank in the ‘battler’ suburbs.”