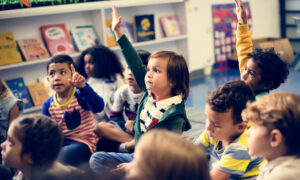 Peter Boghossian on Woke Education: ‘No Other Alternative Than to Defund the System’

A professor at Portland State University, Boghossian is best known for co-authoring a series of satirical papers and publishing them in peer-reviewed academic journals to reveal how likely fake research would be accepted as legitimate scholarship, so long as it fits in the woke narrative. This very woke ideology he has sought to expose, according to Boghossian, has taken over the American cultural and academic institutions.

“I don’t think this is a right-left issue in terms of who has taken over our institutions,” Boghossian told The Epoch Times’ Jan Jekielek, when asked about a cultural warfare that is reshaping the American politics and society. “Instead of thinking about in terms of right-left, I think it’s best to think about it in terms of woke.”

According to Boghossian, who identifies as an atheist, the ongoing Culture War 2.0 has made allies out of former ideological enemies. During the Culture War 1.0, Christians and religious believers debated atheists over issues of religious faith and morality and their role in a secularizing society. During War 2.0, however, non-woke Christians and atheists find themselves in the same trench against their woke counterparts.

“We see conservatives, religious conservatives, and pretty hardcore atheists realigning themselves,” Boghossian said. “Because they both, for example, want to preserve Western civilization—they might think what that means and, to a certain extent, disagrees. But they’re not out destroying our institutions. They’re not toppling statues, etc.”

Unlike the Culture War 1.0 where belligerents who formulate their beliefs based on evidence were willing to revise those beliefs, the “woke people” are rejecting reason and evidence, Boghossian said.

“If you want to make a claim about the world and you think it’s true, then you present your evidence for that,” he said. “But the problem is, they have even said that evidence is a tool of the white man and of the patriarchy.”

Boghossian specifically pointed to the woke takeover of the pre-service training system, noting that it is now impossible to obtain a teaching certificate through programs that are free from the influence of critical race theory or woke ideology.

“It’s a pipeline, it’s a factory,” he said. “They pump out teachers who become accredited and certified who go into the schools. This is the way the ideology perpetuates itself. So any solution to this problem that ignores colleges of education, and specifically pre-service teacher education programs is destined to fail.”

Boghossian also urged people to show up at where the woke agenda is being pushed through, including their places of employment and schools their children attend. “The problem is nobody goes. People don’t go to the meetings and you get fringe groups of maniacs trying to institutionalize or successfully institutionalizing new racist programs,” he said.

“If you hold that as a guiding principle in your life, that you’re willing to revise your beliefs on the basis of evidence, and you’re sincere in choir and you want to figure out what’s true, then you should speak up,” he added.

“Don’t be afraid that you’re going to lose friends, because they probably weren’t your friends anyway.”

With interview by Jan Jekielek.