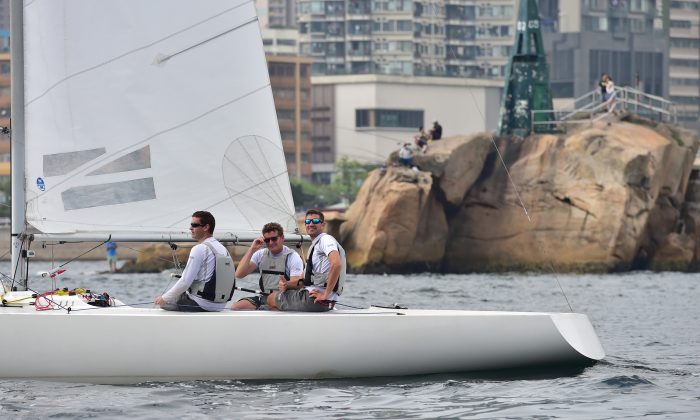 In pursuit races there is a staggered start with the slower boats starting first and the faster boats released at time intervals dependent on their handicaps.

Peter Backe and Anthony Day together with Nick Faulks in Etchells 1333, Jezebel, took the lead on the way out to Shek O rock having overtaken Ruffians, Flying Fifteens and Impalas and although being hounded down by the Big Boats particularly Signal 8, maintained their lead position to the finish. In doing so they not only lifted the HKNRVR vase but also confirmed their win in the Top Dog Trophy Series.

The Backe/Day combination came 4th in the Lipton Trophy, 2nd in the Round the Island Race, 5th in the Tomes Cup and 1st in the HKRNVR to finish the Top Dog Series on 10.276 points. Mark Yeadon in Etchells, Diva Deux, came second in the HKRNVR and also maintained a fine record in the Top Dog Series with 5, 9, 4 and 2 finishes in the four races and finishing just 4-points behind the winners. Frank van Kempen in Etchells, NN1364 took 3rd place in the May 1 race, finished 2nd in the Lipton Trophy, and 1st in the Tomes Cup to take 4th place in the series.

Signal 8, the first of the Big Boats crossing the line just 3 minutes behind the winners finished 4th in the HKRNVR and in 13th position in the series.