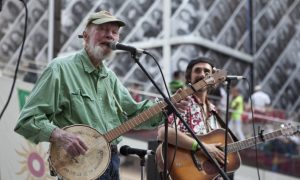 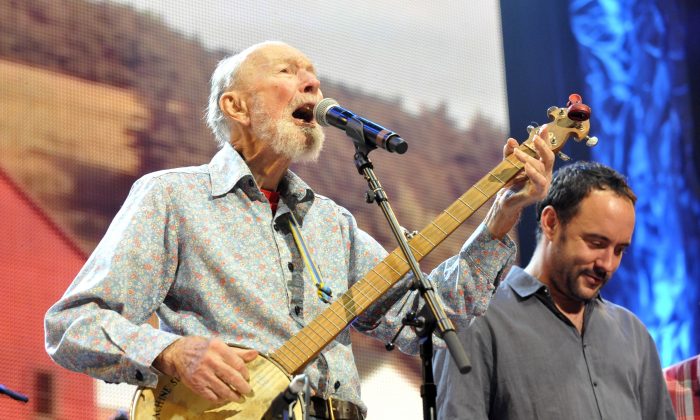 Pete Seeger, my American idol, was a great singer, songsmith, troubadour, and progressive voice. His life was celebrated with tributes in leading newspapers the world over.

What’s less well known is that Seeger wanted to be a newspaperman, but thanks to his unique skills, deep talent, and incredible artistry, he actually “covered” the world in ways that went above and beyond what appeared in much of the media.

He was ahead of the news with the New York Times never quite able to catch up. He touched hearts as well as heads.

At the same time, he sang about the media with an edge that didn’t win him many friends in outlets that treated him as an eccentric, not a major cultural voice.

Here’s a song he liked to sing, written by Vern Partlow, and reported on by the Guardian, safely outside the USA.

As the Chicago Tribune explained, “He went from studying journalism in Harvard classrooms to hoboing across the country singing folk songs to anyone who wanted to hear them.” He felt that the real stories of America were not found in city halls and Congress but among people who worked for a living and struggled for change.

When he was questioned by the House Committee on Un-American Activities, he talked about his original career goal:

MR. TAVENNER: Mr. Seeger, prior to your entry in the service in 1942, were
you engaged in the practice of your profession in the area of New York?

MR. SEEGER: It is hard to call it a profession. I kind of drifted into it
and I never intended to be a musician, and I am glad I am one now, and it is a very honorable profession, but when I started out actually I wanted to be a newspaperman …

Instead of joining the media, he became a media critic. He said to David Guistina of Albany public radio station WAMC, “It’s hard for me to talk about the media without getting angry. Because if the United States or the world goes down in disaster, I would blame the media first of all, because the people running it are intelligent people. They know very well how evil they are. And when they say, ‘Oh, I’m just giving the people what they want’—sure—so do the drug pushers.”

ts not surprising that conscious musicians embraced Seeger in an effort to learn from him, and honor him. Just this week, on his first tour in South Africa, Bruce Springsteen and the E Street Band paid tribute with the boss saying he lost a friend.

In their obit, the Guardian noted,

“Last year, Bruce Springsteen—a friend since the 1990s—released an album of songs Seeger had performed over the years. “We Shall Overcome: The Seeger Sessions” put Seeger back in the spotlight. ‘I wish he hadn’t used my name,’ said Seeger. ‘I’ve managed to survive all these years by keeping a low profile. Now my cover’s blown. If I had known, I’d have asked him to mention my name somewhere inside.’

“While he likes Springsteen’s renditions (‘They’re not my songs, they’re old songs, I just happened to sing ’em,’), he said the renewed attention has added to the admin work that falls to his wife of more than 60 years, Toshi. ‘Most men chain their wives to a sink. Mine is chained to a table covered with correspondence. “Oh, Mr. Seeger, won’t you listen to my record? Read my book, come over here and accept this award.”’ He refuses almost all such requests.”

For years, Pete sang for causes and then became a cause—a cause célèbre, because of his staying power, his devotion to change on every level, as well as his effort to be the change he wanted to see.

Environmental activist Harvey Wasserman tells of visiting Pete and his late wife Toshi, who died on the eve of their 70th wedding anniversary.

“Pete and Toshi’s hillside cabin overlooking the Hudson, not far enough from Indian Point. [The nuclear plant he opposed.] With utter nonchalance Pete had built one of the world’s first electric vehicles by gutting the engine from an old pickup and filling it with car batteries. It got him to town and back. It did the job,” recalls Wasserman.

“Like the Clearwater, a boat to sail the Hudson. To do it well while making a point about the Earth and what she needs. They chopped wood and made preserves and it was all so comfortably grounded.”

Pete stayed informed and wrote songs that touched on contemporary issues or picked up songs by the large network of folk artists who revolved around him. He was a singing newspaper all by himself.

He was frequently interviewed on radio but not so frequently on TV. He told a story of an appearance on the “Today Show “on NBC:

“I haven’t been asked on TV that much in recent years. I did get on the ‘Today Show’ once. And I knew that they wouldn’t want me to sing a certain song. So I was prepared. I arrived at 6:00, and over the intercom, the director said, ‘Pete, what you got for us?’ And I said: ‘Well, I got a little banjo tune, and I got something a little more serious. It’s a funny song but it’s got a serious point.’ ‘Well, let’s hear ’em.’ So I sang the banjo tune. ‘Fine.’ So I sang the other, called ‘Garbage,’ which has the whole crowd going, ‘Garbage, garbage, garbage.’”

Some of the lyrics:

Surprise, surprise, “Today” didn’t like the sound of that and never had him back.

My hunch is that more people learned to care about the world, war and peace, and justice and injustice from Pete’s songs than any of the newspapers and magazines. He believed in and stirred audience participation. It was always about everyone, not just him.

I was privileged to meet and interview him many times with my first exposure back in the fifties at hootenanies, and concerts like one on Christmas l955 in the auditorium of the old Museum of Modern Art where over the din of rumbling subway cars, he introduced us to South African songs of struggle like Senzenia, and Wimoweh. They excited my interest and led to a journey that drew me deeply into the freedom struggle in that country.

Later, in the 1970s, I sent him a note thanking him for sitting down with me for a radio interview in Boston. I wrote a fan letter dripping with love—a very unjournalistic thing to do.

He responded with the humility and brevity for which he was known. A postcard soon arrived with one word on the back. “Thanks,” it said. Signed “Pete” with his characteristic banjo design scribble under it and, some Japanese words, maybe Toshi’s contribution.

I have kept it plastered on my wall ever since, on the wall of fame in the bathroom, the room that gets the most traffic in my apartment as in most others.

News Dissector Danny Schechter blogs at NewsDissector.net and edits Mediachannel.org. His latest book is “Madiba AtoZ: The Many Faces of Nelson Mandela.” Comments to dissector@mediachannel.org