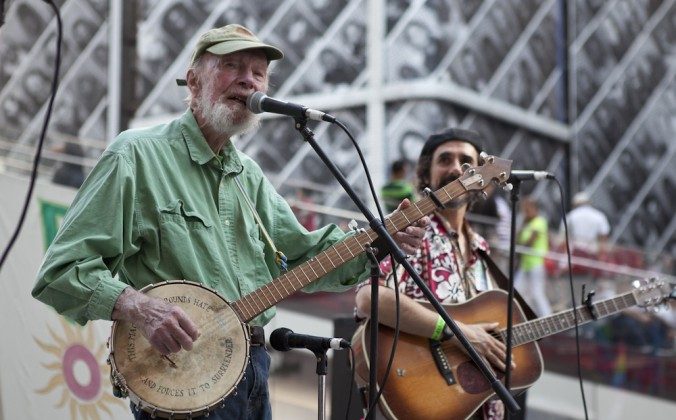 Singer and songwriter Pete Seeger was a giant of American culture. Born in New York, Seeger was the son of musicologist Charles Seeger. He learned the banjo as a teenager, and traveled the American South when he was only 19, helping folk archivist and field recorder Alan Lomax collect traditional songs.

Seeger’s first group was the Almanac Singers, which played in union halls for gas money, according to the Rock and Roll Hall of Fame. Woody Guthrie joined the group in 1941. The group broke up when World War II began.

Seeger started The Weavers singing group in 1948 after serving briefly in the Army.

They were for a time the most popular group in the country. Poet Carl Sandburg said of them, “The Weavers are out of the grassroots of America. When I hear America singing, the Weavers are there.”

Seeger’s genial demeanor and gentle inclusiveness went with a strong backbone. The Weavers were blacklisted during the McCarthy era in the 1950s, when many entertainers lost their careers. Their concerts were canceled and they lost their recording contract with Decca Records.

Wisconsin Sen. Joseph McCarthy used his position as chairman of the Committee on Government Operations and its Permanent Subcommittee on Investigations to launch investigations designed to document charges of communists in government. He was censured by the Senate on Dec. 2, 1954, for behavior that was “contrary to senatorial traditions,” according to his Senate biography.

When Seeger was subpoenaed to testify before the House Un-American Activities Committee, he insisted on his First Amendment rights: “I am not going to answer any questions as to my associations, my philosophical or my religious beliefs, or how I voted in any election or any of these private affairs. I think these are very improper questions for any American to be asked.” He was briefly jailed for contempt of Congress.

Seeger had in fact been a communist. He said he left the Communist Party around 1950 and later renounced it. But the association dogged him for years.

Seeger left The Weavers in 1959 and signed a contract with Columbia Records. He wrote songs and recorded prolifically with the label.

He thought of concerts as a community, and started the now common custom of inviting the audience to sing along. According to the Rock and Roll Hall of Fame, he said in a 1971 interview: “My ability lies in being able to get a crowd to sing along with me. When I get upon a stage, I look on my job as trying to tell a story. I use songs to illustrate my story and dialogue between songs to carry the story forward.”

A Long Marriage, and Causes

Seeger was devoted to civil rights, pacifism, and conservation.

He was married for almost 70 years to Toshi Seeger, of whom he wrote, “Thanks to my wife Toshi, without whom the world would not turn nor the sun shine.” She died in 2013, only days before their 70th anniversary.

“Once called ‘America’s tuning fork,’ Pete Seeger believed deeply in the power of song. But more importantly, he believed in the power of community—to stand up for what’s right, speak out against what’s wrong, and move this country closer to the America he knew we could be. Over the years, Pete used his voice—and his hammer—to strike blows for worker’s rights and civil rights; world peace and environmental conservation. And he always invited us to sing along. For reminding us where we come from and showing us where we need to go, we will always be grateful to Pete Seeger,” stated Obama.