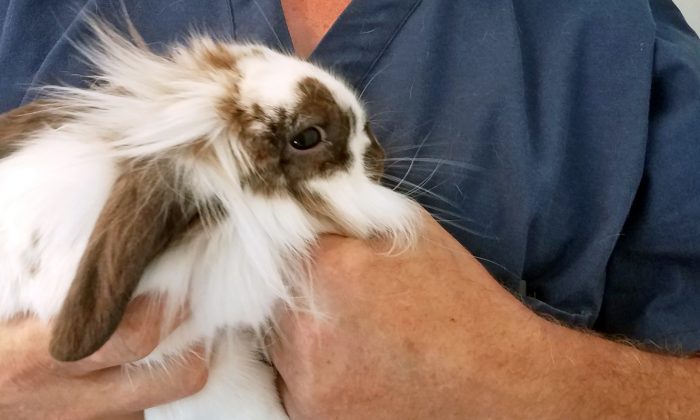 A rabbit rescued from the Lamprey River in Raymond, N.H., on July 7, 2019. (Courtesy of Candray Pet Care Center/Facebook)
Crime and Incidents

Authorities are investigating why a rabbit was found in a New Hampshire river with a rope around its neck on July 7.

About 4:19 p.m. local time, Raymond New Hampshire Police Department responded to an animal complaint that a pet rabbit was swimming in the Lamprey River near Pecker Bridge, 30 miles southeast of Concord.

A pet rabbit was found with a rope around its neck in a N.H. river, police say https://t.co/fk1GbwBOe2 pic.twitter.com/dsXGCC7QZh

Two kayakers came across a rabbit barely keeping its head above water.

It was tied to a five-pound weight — tossed there by a juvenile. https://t.co/xMGNHeWL7P

Police said two kayakers rescued the rabbit from the water and surrendered it to officers when they arrived at the scene.

“[The] caller reported that they found a rabbit with a rope around its neck,” police said on Facebook. “The rope was attached to a [five pound] weight.”

Officers transported the bunny about 5 miles west to the nearest Candray Pet Care Center at Candia where veterinarians nursed the animal back to health.

“The rabbit is doing well and is safe,” police said. “The bunny is alive and well.”

Rabbit recovering after being found in river with rope around neck https://t.co/JTqvdblXy8 pic.twitter.com/zK7pKjCdGH

Candray Pet Care Center said it had already received “overwhelming sympathy” and a “huge emotional response” for the rescued bunny.

“Thank you for caring,” the pet care center said on Facebook. “She is recovering from the trauma and seems to be improving.”

Rabbits are a common pet in the United States. They are the third most popular preference after cats and dogs, according to the Humane Society of the United States, which also makes them one of the most often abandoned.

If nobody claims the bunny, it could be made available for adoption.

“We will let you know [on Facebook] if and when she becomes available for adoption,” the pet care center said. “At this time we are simply keeping her safe and monitoring her carefully as she heals.”

Candray Pet Care Center Veterinarian Matthew Cobb described the treatment of the rabbit as “sick,” saying the rabbit swallowed a lot of river water, according to the Associated Press (AP).

Animal cruelty charges are pending against a juvenile, AP reported.

HORRIBLE: Police said that a juvenile will face animal cruelty charges after a rabbit was rescued from a river with a rope tied around her neck and a 5-pound weight attached to it.