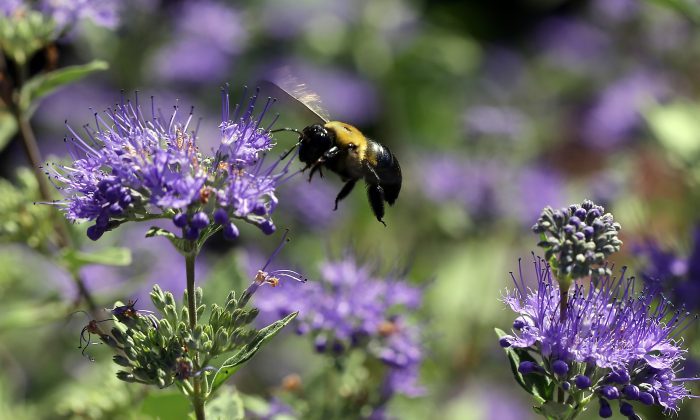 Pesticide-Makers Point at Others in Bee Die-Offs

The pesticide maker highlights its work to foster the insects around the world, welcoming school-age children at the site built apart from plant research labs and executive offices. Amid the displays are bottles of Bayer pesticides, something that struck Cara Garrison, a student at Raleigh’s St. Thomas More Academy, as odd.

“I thought it was a little weird to see some of that among all the bee-related things,” Garrison said. “I was like, is that supposed to be there?”

That display in that building captures Bayer’s multibillion-dollar balancing act.

Some of those pesticides contain tobacco-derived chemicals called neonicotinoids that many researchers say play a role in declining bee populations. Bayer, which earned profits of more than $3.6 billion, spent $12 million on promoting bee health as the world’s top neonic maker and No. 2 Syngenta fend off suggestions the chemicals are bee-killers.

Neonics produced by Bayer CropScience and Syngenta among the chemicals most toxic to bees, according to a USDA study.

Both companies are fighting pressure from regulators in the U.S. and Europe with publicity campaigns and lobbying aimed at telling people that neonics are beneficial and safe when used correctly, and that bees face greater peril from parasites, pathogens, and poor diets as wild flowering plants diminish.

Bee die-offs could disrupt the human food chain, with a third of the foods consumed by Americans and Europeans dependent on pollinators like them.

Researchers suspect neonic pesticides play some role in reported die-offs and the mysterious Colony Collapse Disorder. But they don’t know how much.

A comparison of more than three dozen pesticides found neonics produced by Bayer CropScience and Syngenta among the chemicals most toxic to bees, according to a September study by USDA researchers.

Bayer, Syngenta, and Monsanto—which coats its seeds with neonics—are encouraging nonprofits, landowners, and governments to plant more flowers and other plants bees need to feed. Their representatives are speaking at beekeepers’ conferences and visiting agricultural research universities.

Besides inviting visitors to bee centers on its corporate campuses outside Raleigh, North Carolina, and Monheim, Germany, Bayer offers teachers a downloadable digital science lesson about bees. A company Twitter feed promotes the benefits of neonics and studies that refute their link to bee deaths, often using the hashtag #FeedABee.

A global agro-chemical trade magazine recently honored Bayer’s pro-bees campaign for what judges said was its effort “to broaden understanding and shift conversation from blaming solely pesticides towards a multiplicity of factors.”

While the mite may be the greatest adversary of Callahan’s honeybees, it doesn’t explain why mite-free bumble bees are also disappearing.

Critics said that is all little more than propaganda akin to the cigarette industry’s efforts to confound people by highlighting inconclusive science.

“I call it a red herring. You claim that ours isn’t the only problem, so therefore it isn’t a problem,” said Massachusetts beekeeper Dick Callahan, a retired executive with a doctorate in entomology who co-authored a Harvard study on the effects of neonics on honeybees. The companies blame a parasitic mite as the biggest bee killer. Callahan said while the mite may be the greatest adversary of his honeybees, it doesn’t explain why mite-free bumble bees are also disappearing.

Neonics were a breakthrough because they can be used to coat seeds rather than sprayed over plants. As the plant sprouts, the chemical is incorporated into every part of it—from roots, to stalk, to the flowers that attract bees and butterflies.

Without neonics, growers could face extensive crop losses since old pesticides have been phased out because of the hazards they posed to humans and wildlife, said Dominic Reisig, an insect researcher at North Carolina State University who advises farmers.

“I think the final verdict is still out there” on how large a role neonics play in bee deaths, Reisig said. “I would say clearly there’s something there, but is it 1 percent? Ten percent? Ninety percent? We don’t know.”

Bayer produces three of the world’s top five neonic pesticides in a worldwide market estimated to be worth about $3 billion, with Bayer’s two top-selling products taking about half the market, said Sanjiv Rana, editor-in-chief of Agrow, a trade publication for the agricultural chemicals industry. Syngenta’s best-selling neonic is worth about $1 billion in annual sales, Rana said.

Becky Langer, the Bayer CropScience manager for U.S. bee health, denied the company’s 4-year-old campaign is related to the company’s neonic sales. It grew out of decades of research on the interaction of chemicals and the crucial pollinators, she said.

She added: “Bee numbers are actually not declining.”

But that depends how you count. On the one hand, figures from the U.N. Food and Agriculture Organization and the U.S. Department of Agriculture show there are more bee colonies now than 30 years ago.

It’s harder to keep bees than it used to be. It seems to get harder every year.
— Steve Hildebrand, beekeeper

But those numbers can be deceiving since beekeepers routinely separate a healthy hive into two, a practice that helps overcome accepted annual losses of about 18 percent. Beekeeper Steve Hildebrand, who keeps about 20 hives outside Raleigh, annually divides healthy colonies to replace dead ones.

“It’s harder to keep bees than it used to be,” he said. “It seems to get harder every year.”

Losses in the United States for the past five years have been especially acute, with reported annual losses of 30 percent to 45 percent, according to a study authored by researchers including the University of Maryland’s Dennis vanEngelsdorp . The heavy death toll continues through the spring and summer, when bee populations are collecting pollen and should be at their healthiest, the study said.

Across Europe and nearby countries like Algeria, beekeepers reported 17 percent of colonies lost last winter, twice that of the previous year.

That has regulators and retailers zeroing in on neonics. The U.S. Environmental Protection Agency is working on new risk assessments, and the European Union is reviewing a 2-year-old ban on the biggest-selling neonics from crops during their flowering stage.

Meanwhile, Bayer is working on repellants to keep bees away from pollinating plants until pesticides lose their killing power, remote sensors for monitoring hive health, and the latest in a 30-year series of mite-killing treatments.

Work to develop a new miticide is worthwhile even though the parasites will likely develop a resistance before long, Bayer CropScience North America CEO Jim Blome said.

“It’s very difficult to get your investment back that way. In fact, you won’t,” Blome said. “We believe in expanding bee populations.”