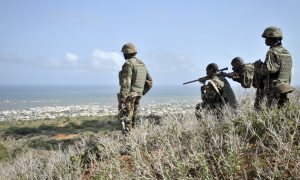 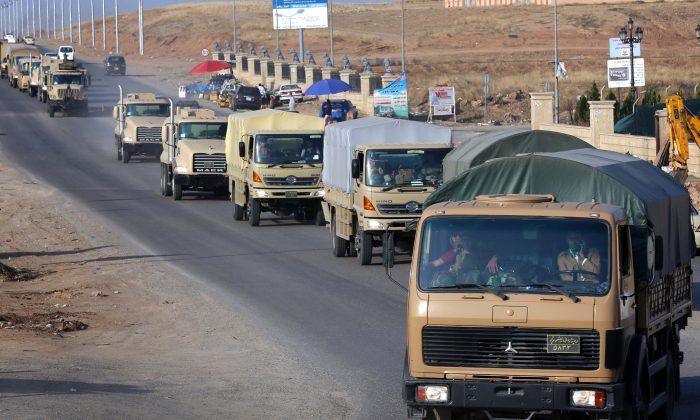 Dozens of Kurdish peshmerga fighters drive through Arbil after leaving a base in northern Iraq on Oct. 28, 2014, on their way to the battleground Syrian town of Kobani. 'Forty vehicles carrying machineguns and weapons and artillery with 80 of the peshmerga forces will head to Dohuk (province) and then cross the border today,' a Kurdish officer told AFP. A further 72 will fly to Turkey the following day, the officer said. The town on the Turkish border has become a crucial front in the fight against the Islamic State (IS) group, which overran large parts of Iraq in June and also holds significant territory in Syria. (Safin Hamed/AFP/Getty Images)
Middle East

SURUC, Turkey—A vanguard force of Iraqi peshmerga troops entered the embattled Syrian border town of Kobani from Turkey on Thursday, part of a larger group of 150 fighters that the Kurds hope will turn back an offensive by militants of the Islamic State group.

The deployment, accompanied by 50 members of the Free Syrian Army, was condemned by Syria’s government as an act of Turkish aggression and a “blatant violation of Syrian sovereignty.”

The first group of Kurdish fighters crossed into Syria following heavy overnight clashes as Islamic State extremists unsuccessfully tried to capture the frontier post, the only gateway in and out of the town.

Kobani is under attack by the militants from three sides despite weeks of airstrikes by a U.S.-led coalition.

Mustafa Bali, an activist based in the town, said the remaining troops will follow later in installments as a security precaution because the IS fighters were targeting the border area.

Other peshmerga forces were assembled in a facility on the outskirts of the Turkish border town of Suruc, about 12 kilometers (7½ miles) from the Syrian frontier.

The Kurds have high expectations for the mission of the peshmerga troops, despite their low numbers. They are hoping that some of the more advanced weaponry they carry with them can help break a stalemate with the extremists, who outnumber and outgun the Kurds.

Activists say there are about 1,000 Syrian Kurdish fighters and more than 3,000 jihadis in the Kobani area. Most civilians fled in the first days of the IS onslaught.

The ability of the small force to turn the tide of battle will depend on the effectiveness of their weapons and the continued bombardment from the coalition.

The coalition has carried out more than 150 airstrikes against the militants in and around Kobani, killing hundreds of them and helping stall their advance. But Syrian Kurds have pleaded for advanced weapons to help them gain the upper hand.

The U.S. Central Command said there were 12 airstrikes in Syria, with 10 of those in the Kobani area since Wednesday. The coalition also is conducting airstrikes on IS positions in Iraq, where the group controls large parts of territory.

Islamic State militants launched the attack on Kobani six weeks ago, capturing dozens of Kurdish villages in addition to parts of the border town. More than 200,000 people have fled to Turkey and more than 800 people have died, activists say.

In the Syrian capital of Damascus, a political adviser to President Bashar Assad accused Ankara of trying to expand its influence in Syria by sending in anti-government forces.

“I see that Turkey is continuing in its role of aggression against Syria and its very dangerous role in the region,” Bouthaina Shaaban said in an interview with the AP.

Shaaban suggested Turkey was trying to revive its dominant role during the Ottoman Empire and did not care about saving the Kurds.

The Foreign Ministry in Damascus called the action “a blatant violation of Syrian sovereignty and international law.”

The statements underscored the acrimonious relations between once friendly neighbors. Turkey emerged early on as a main backer of the rebels trying to overthrow Assad, and even now has balked at joining the fight against the Islamic State militants in Syria before the U.S. commits to a plan that includes Assad’s overthrow.

On Wednesday, a group of 50 Syrian rebels entered Kobani — also via Turkey — in a push to help Kurdish fighters there against the IS militants. The rebels are from the Free Syrian Army and were meant to help the long-awaited Iraqi peshmerga fighters and the town’s Kurdish defenders.

The FSA is an umbrella group of mainstream rebels trying to topple Assad. The political leadership of the Western-backed FSA is based in Turkey, where fighters often seek respite from battle.

Ankara is under pressure to take greater action against the IS militants — from the West as well as from Kurds in Turkey and Syria. The Turkish government recently agreed to let the fighters cross through its territory into Syria, but only those peshmerga forces from Iraq, with whom it has a good relationship, and not those from the Kurdistan Workers’ Party, or PKK.

Turkey sees the Syrian Kurds defending Kobani as loyal to what it regards as an extension of the PKK. That group has waged a 30-year insurgency in Turkey and is designated a terrorist group by the U.S. and NATO.

Kurdish fighters in Syria have repeatedly said they do not need more fighters, only weapons. Kurds in Syria distrust Turkey’s intentions, accusing it of blocking assistance to the Kobani defenders for weeks before giving in to pressure and shifting its stance.

The battle for Kobani is a small part in a larger war in Syria that has claimed the lives of more than 200,000 people since 2011, according to activists. The conflict began with largely peaceful protests calling for reform. It eventually grew into a civil war as people took up arms following a brutal crackdown by Assad on demonstrators.

From The Associated Press. AP writers Bassem Mroue and Zeina Karam in Beirut contributed to this report.