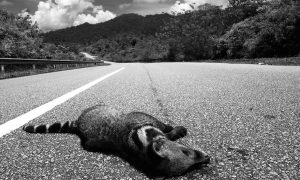 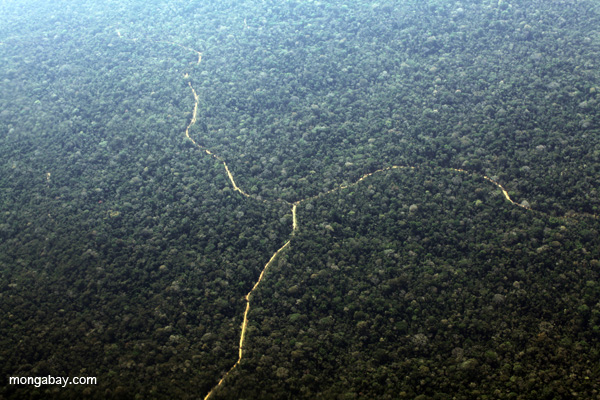 A logging road transects Peruvian rainforest (this is not an image of one of the newly detected roads). Photo by Rhett A. Butler.
News

Roads spread out like multi-fingered tendrils, eating into the surrounding forests of Cordillera Azul National Park, in the Department of Loreto in Peru. What is their purpose? Are they being built legally? If so, are they remaining within the specifications of their permits, or are they overstepping their bounds? A team of researchers has taken a first, important step in answering these questions by determining the roads’ locations and extent using images and data collected by satellites.

The Monitoring of the Andean Amazon Project (MAAP) has been surveying road construction in South America in a unique way – instead of tracking down these road networks on the ground, they watch them from outer space, using satellite imagery and specialized software. With a refined algorithm developed over three years, a speedy peer-review process, and diligent tracking, MAAP has been able to make evidence of deforestation publicly accessible – including to officials of the Peruvian Forestry Department, policy makers, civil society and the media. MAAP’s system of real-time deforestation monitoring could allow for the detection of tree-cover loss from the skies, before people on the ground – such as government authorities – are even aware of its occurrence.

Finer’s team unearthed a suspicious network of roads in the department of Loreto in northern Peru in early 2013, recently making public their results thus far. For two years, they watched the network grow to over 150 kilometers in length, split into the northern (77.38 kilometers) and southern (76.24 kilometers) networks. The southern road system is located entirely in the protected buffer region of the Cordillera de Azul National Park, and is characteristic of roads meant for logging. Since hardwood trees of interest are scattered through the forest, logging roads have the appearance of meandering somewhat aimlessly through the forest.

“Traditionally its really hard to pick up illegal logging because it is selective in nature,” said Finer in an interview with mongabay.com. Through this technology, however, despite not being able to see trees being felled, one can watch roads being formed and monitor logging indirectly.

The purpose of the northern road network, however, seems to be harder to pinpoint. Between July and September of 2014, it crossed into a proposed palm oil project by company Desarrollo Agroindustriales, which receives technical support from Palmas Espinas, a subsidiary of Peru’s powerful Romero Group. NGOs have spoken out in strong opposition of the Romero Group’s plans to deforest more than 23,000 hectares (230 square kilometers) of land (with primary forest occupying 84.6 percent according to a report from the ACCA), for the establishment of four palm oil concessions in Loreto. One of these is Tierra Blanca, into which the new road runs, and although the Peruvian Government has approved its Environmental Impact Assessment, deforestation on the ground has allegedly not begun.

The MAAP team conducted further analyses by placing a kilometer-wide buffer on either sides of the road networks, to indicate where road-facilitated clearing may occur. This revealed that a potential area of over 40,000 hectares (40 square kilometers) of primary forest is now accessible via these new road networks. Studies across the globe have clearly predicted that road networks are prime targets for deforestation due to human occupancy and rising land values.

Over the last three years, the Amazon Conservation Association and its Peruvian counterpart ACCA-Conservación Amazónica, have been perfecting a system for monitoring deforestation across Peru in near real-time.

According to Matt Finer, who heads up analysis and writing for MAAP along with Sidney Novoa, one of two Landsat satellites whizzes past over 30 areas of interest monitored by MAAP roughly every eight days. With some luck, the image isn’t blocked by clouds, and his team is able to compare it to the last clear image they have for the area, using CLASlite forest monitoring software to assess changes in forest cover between the images.

The team determines areas of interest by using satellite tools to find regions with tree cover changes. Then, MAAP acquires LANDSAT images over the period of interest to classify and measure each type of visible forest cover. A patch of forest is considered to be primary forest if the earliest LANDSAT image (typically from the 1980s) reveals dense, closed-canopy coverage, and has a similar spectral signature to areas known to be undisturbed.

The Carnegie Institution for Science developed CLASlite, and it is available for free to any institution that would like to use it for non-commercial purposes. It has been used successfully by the Ministry of the Environment in Peru (MINAM) to monitor forest loss across the country. Organismo de Supervisión de los Recursos Forestales y de Fauna Silvestre (OSINFOR), the body responsible for regulating the use of forest resources in Peru, also recently released reports on the effects of gold mining on deforestation in Loreto, Ucayali and Madre de Dios Departments.

MAAP is careful not to speculate on the legality of any deforestation observed through their analyses. “We want to report the technical information and not spend five months trying to piece together whether it’s legal or not. If we just publish it quickly, then the agencies that are experts can do the evaluations.”

However, this does not mean that policy changes will not take place. After MAAP’s subscribers were notified of the new road networks in Loreto, Finer received interest from the Ministry of the Environment in Peru and officials from related forestry agencies who indicated their interest in following up on the road network discovery.

In the one month since it was launched, MAAP has reported evidence of gold mining expansions in La Pampa in the Madre de Dios Department, and large-scale deforestation for cacao and oil palm plantations near the towns of Tamshiyacu and Nueva Requena, respectively, in Ucayali Department. By examining deforestation within oil-palm concessions, MAAP can track how much primary forest has been cleared in each case.

“We hope that sharing such information with these actors will contribute to changes in policy and practice that minimizes future deforestation and promotes conservation in the Andean Amazon,” states the MAAP Team in their report.

This article was written by Mrinalini Erkenswick Watsa, a contributing writer for news.mongabay.com. This article was republished with permission, original article here.