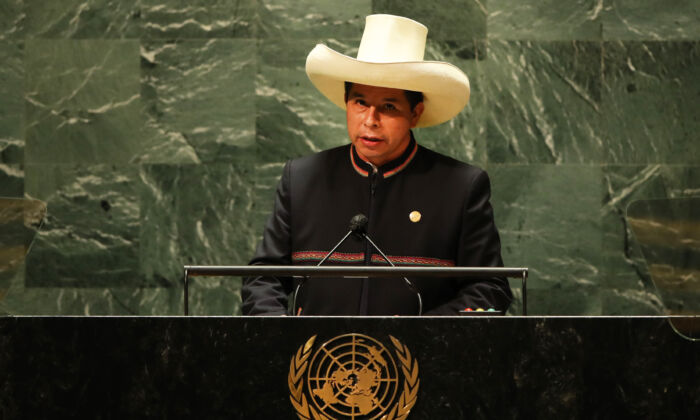 President of Peru Pedro Castillo speaks during the annual gathering in New York for the 76th session of the United Nations General Assembly on Sept. 21, 2021, in New York City. (Photo by Spencer Platt/Getty Images)
Americas

SANTA CRUZ, Bolivia—Peru’s socialist President Pedro Castillo made cryptic remarks during a live interview on Jan. 25 about potentially granting a sea outlet to the landlocked nation of Bolivia.

Castillo indicated he’d heard the cry for equal access from their southern neighbor, then added he’d “consult the people” of Peru through a referendum without giving further details.

When asked about the reaction his proposal might provoke, Castillo said, “I don’t care about that. I’ve come to do the will of the Peruvian people.”

Predictably the president’s comments triggered an immediate outrage within the country.

It is the latest in a series of debacles and administrative missteps for the embattled head of state.

Castillo narrowly missed being impeached in December 2021 due to an embezzlement scandal involving members of his administration and is currently being investigated by the attorney general’s office for alleged influence-peddling over government contracts.

“Why put up a barrier [to Bolivia]?” Castillo asked rhetorically.

At the top of the list of complaints about the leader’s comments was the nation’s military.

“The president’s statements, outlining the possibility of undermining the integrity of the republic, becomes an offense to good Peruvians,” the declaration read and was signed by three commanders.

Further, the proclamation called Castillo’s proposed land grant to Bolivia an “unacceptable betrayal of the homeland for the benefit of another nation’s interest” and then compared it to treason.

Congresswoman Maria del Carmen Alva also fired back at the president with a sharp reminder that Article 54 of the nation’s constitution specifies the territory of the state is “inalienable and inviolable,” which includes the land, subsoil, maritime domain, and airspace.

She added, “National sovereignty and the constitution [must be] respected.”

Another congressional member Ernesto Bustamante said Castillo’s careless remarks have already put a strain on the relationship between Bolivia and Peru by creating unrealistic expectations through the president’s “clear support for granting sovereign access to the sea from Peru.”

Fanning the flames of indignation, congresswoman Rosselli Amuruz asked the president to resign from office.

“Our country cannot continue aimlessly having a person whose position is too big for him and who admits that he is not prepared to govern … resign Mr. President.”

Castillo attempted to smooth the ruffled feathers of his countrymen by clarifying his position on Jan. 31.

“Yes, I expressed myself badly and I apologize to our people,” he admitted.

The president went on to assure Peruvians that he would do nothing without their popular consent and suggested putting the disputed measure to a vote.

He also pointed out the concept of granting sovereign territory to Bolivia for maritime use was not a new concept and had been proposed under former dictator Alberto Fujimori and President Alan Garcia.

Castillo said he would only offer ocean access to Bolivia with the condition of mutual development of economic and tourist growth, and investments between the two nations.

The government of Luis Arce in Bolivia, a fellow socialist regime that has endured since 2006 under former President Evo Morales, has been an ardent supporter of Castillo’s administration.

He also mentioned the prospect of gaining, in exchange for granting an ocean outlet to Arce’s government, cheaper gasoline from Bolivia.

“Rest assured our brothers that I will be the first to defend the integrity of our country and that our proposal for a maritime concession does not negate national sovereignty,” Castillo said.