Editorial: Where Ties With Communist China Are Close, the Coronavirus Follows
0 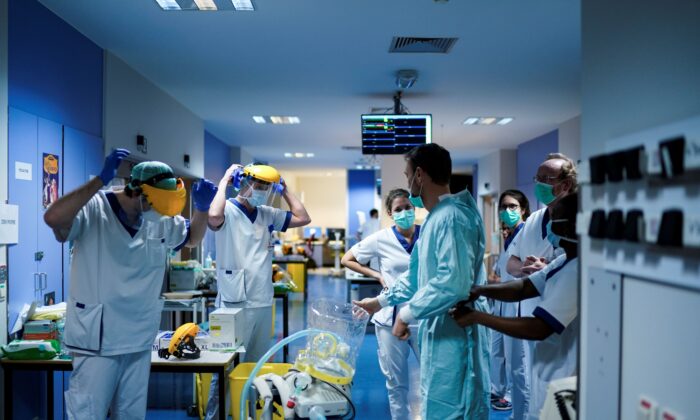 Medical workers put on their protective gears before working at the unit for coronavirus COVID-19 infected patients at the Erasme Hospital in Brussels on March 27, 2020. (Kenzo Tribouillard/AFP via Getty Images)
Thinking About China

Belgium, based on its population of 11 million and geographical size of 30,500 square kilometers (11,849 square miles), is considered a small country among the 195 sovereign nations in the world.

But looking at its current number of deaths and confirmed infections due to the CCP virus, Belgium has one of the world’s highest death rates.

As of April 23, the number of confirmed infections in Belgium announced was 42,797; the number of deaths was 6,490—making the death rate roughly 15 percent. This places Belgium’s mortality rate above hard-hit nations such as the United States, Spain, Italy, and the United Kingdom.

Why is Belgium experiencing such a severe situation?

The Epoch Times editorial article, “Where Ties With Communist China Are Close, the Coronavirus Follows,” suggests that “the heaviest-hit regions outside China all share a common thread: close or lucrative relations with the communist regime in Beijing.”

The situation in Belgium is no exception. In fact, Belgium has had close ties with the Chinese Communist regime, from the royal family to the government, for many years.

Two of Belgium’s most important ports have embraced Beijing’s Belt and Road Initiative (BRI, also known as One Belt, One Road), an ambitious project to build geopolitical influence by financing infrastructure projects throughout parts of Europe, Africa, and central and south Asia.

Belgium’s geographical location is strategically advantageous: It faces the Netherlands to the north, France to the south, Luxembourg and Germany to the east, and the North Sea to the west.

Belgium’s largest port of Antwerp is close to the production and consumption center of Europe, and as such, was coveted by Beijing. In July 2015, the Port of Antwerp set up a Belt and Road task force, signing a deal with Chinese companies to build a “China-Europe-Africa International Trade and Logistics Center.”

The Port Authority of Antwerp then signed “twinning port” agreements or memorandums of understanding with Chinese ports in Shanghai, Shenzhen, Ningbo, Tianjin, Qingdao, and Dalian.

In May 2018, the first Silk Road train from a Chinese port in Tangshan arrived in Antwerp as part of a direct railway link between the two countries.

Meanwhile, the port training center at Antwerp has trained about 3,800 Chinese maritime experts.

The port of Zeebrugge, on Belgium’s northern coast, is the nation’s second most important commercial port. It is close to Britain, and today, there are ferry connections between Zeebrugge and the British ports of Hull and Dover.

As part of the Belt and Road project, China’s state-owned shipping firm Cosco signed an agreement in November 2017 to acquire a controlling stake in the container terminal at Zeebrugge. The agreement “contributes to strengthening Belgian-Chinese trade and the international position of the Port of Zeebrugge.” Kris Peeters, then-deputy prime minister of Belgium, said at the signing ceremony in January 2018.

The car factory Volvo Car Gent, located in the port district of Ghent in western Belgium, covers an area of more than 490,000 square meters (about 5.27 million square feet). The plant, which opened in 1965, was the first European Volvo plant outside Sweden.

While Ford Motor bought Volvo in 2009 for $6.45 billion, the automaker ran into trouble as a result of the global financial crisis, and began divesting assets. In 2010, Ford sold Volvo to China’s Geely Group,  which became the first Chinese company to own a multinational premium car brand, for $1.8 billion.

With the increasing popularity of Volvo in the Chinese market, the brand’s car output continues to reach new highs, and the Volvo car plant has gradually become the fulcrum for the global layout of Geely.

Geely received approval from the Chinese government to build a Volvo plant in Daqing, in Heilongjiang province, in 2011. Engineers from the Ghent factory brought their technical expertise to ensure that the new plant would have the same quality and competitiveness as other plants around the world.

In May 2017, Peeters went to China to attend the Belt and Road International Cooperation Summit Forum. During the visit, he made a special trip to Daqing to witness the launch of the trial operation of Volvo’s S90 luxury sedan, which was being moved to the Ghent factory through the “Overland Silk Road” Central European special train.

On May 30, a batch of Volvo S90 cars produced in Daqing was transported to the port of Zeebrugge in Belgium via the Asia-Europe Railway and transferred to Ghent. Soon after, a large number of new luxury Volvo cars that were made in China were distributed to the European market from the central auto plant in Ghent.

In June 2017, Chinese Premier Li Keqiang, accompanied by then-Prime Minister Charles Michel, visited the Geely Volvo Innovation Achievement Exhibition. The two leaders saw the Volvo S90 model produced in the Daqing plant loaded aboard the China-Europe train to Belgium. The relations between the leaders of both countries ensured that there were no obstacles in selling China-made Volvo cars to European countries.

In July 2019, the first batch of Volvo’s XC60 model was shipped to Ghent from the Chengdu plant in China—the third Volvo plant in the country.

Geely spent $1.8 billion to buy Volvo. Can it compete in the targeted European market? Can they afford the world’s most cutting-edge automotive production technology that is continuously upgraded? This was still very uncertain at the time. But now it seems that China already has what it wants. At the same time, the 100 percent Chinese-owned Swedish car brand has fully demonstrated the “Made in China” high-quality products in Europe and the world. This is precisely the influence that the Chinese regime wants to achieve in pushing forward its Belt and Road Initiative.

The Volvo Car Gent factory was praised by Xi Jinping in April 2014 as “a model of economic and technological cooperation between China, Belgium, and Sweden.”

The Belgian auto industry that is seeking investment and business cooperation with China can be likened to the Chinese idiom: “pick a sesame seed only to lose a watermelon,” which means, concentrate on small gains at the expense of more important ones.

Many EU member states expressed that the BRI project runs counter to the EU’s free trade proposition because these Chinese companies are subsidized by the Chinese government. Therefore, they have unfair advantages in competition with European companies.

Kris Peeters, Deputy Prime Minister and Minister of Economy and Employment of Belgium from 2014 to 2019, visited China many times. He stated on various occasions that Belgium is willing to team up with Beijing to contribute to the BRI.

Peeters praised the move, saying: “We believe that the AIIB has the ambition to set the example for other development banks in China and abroad by adopting sound global standards with respect to economic viability, fiscal sustainability, climate and environment-friendliness and social sustainability.”

During an interview with Chinese state-run media Xinhua News Agency, Peeters hailed the BRI as “a grand vision.”

“In order to be successful, they must be developed together with all stakeholders, not only with national and regional governments and economic operators, but also with the local communities who will be most directly affected,” he said.

On March 27, 2018, when Peeters attended a ceremony at Volvo’s factory in Ghent, he praised China’s Geely brand in Belgium, and criticized the Trump administration for increasing tariffs on Chinese products as “unwise” trade protectionism.

In an exclusive interview with Chinese state media Southern Metropolis Daily on Oct. 27, 2019, Leterme said Belgium is a gateway to the European market as well as a major logistic hub in Europe. Belgian ports offer excellent connections to all major European centers for consumption and production. He proposed the Belgian government to expedite the feasibility assessment of joining the BRI framework. He also revealed that Belgian leaders had already “put it on the agenda” and started discussions.

Peeters and Leterme had made a number of appearances as supporters when the CCP promoted the BRI around the world, urging other EU member states to participate in the initiative. This is very rare among European leaders.

Beijing has opened six Confucius Institutes in Belgium so far. In addition, more than 50 schools in Belgium that offer Chinese language courses use textbooks provided by the CCP, which means, these are brainwashing materials compiled by the regime.

In recent years, the two countries have more than 100 cultural exchange programs in music, art, and cultural performances every year. The Brussels Chinese Cultural Center, founded in 2015, is an active participant.

Erik Famaey, treasurer of the Belgian-Chinese Economic and Commercial Council (BCECC), spoke at the exhibition, touting the BRI as a “historic project” that “benefits not only Asia but other regions of the world.” The BCECC, established in the 1980s, is the leading Belgian business association for companies engaged in doing business in or with China.

However, all China experts who have a deep understanding of the CCP know that the BRI is certainly not just an economic initiative or economic project. Beijing wants to extend its influence around the world by using its BRI to infiltrate other nations’ politics, diplomacy, military, defense, culture, and education. The primary tasks of the Chinese consulates and the Confucius Institutes in other countries are to seize all opportunities to promote the BRI and glamorize the “China story.”

According to an April 2 report by Xinhua, Xi Jinping had a phone conversation with King Philippe, in which the Belgian king said that China took the lead in getting the CCP virus outbreak under control, and its experience is of important value to other countries fighting the pandemic.

“Noting China has been supporting and contributing to other countries’ fight against the disease, King Philippe said Belgium appreciates China’s provision of emergency medical protective supplies, and is willing to collaborate with China on drug development,” Xinhua reported.

Xinhua is the official mouthpiece of the CCP. It is difficult for the outside world to verify whether King Philippe actually made such statements. Those words seem to parrot the CCP ’s narrative. However, his close relationship with the CCP is evident.

Shortly after the phone conversation, Brussels Times reported that 3 million protective masks delivered to Belgium from China were rejected because they did not meet the quality standards.

A Xinhua report quoted Xi as saying that China would “tighten up quality control measures, and provide as many resources as it can for the global fight against the disease.” Xi’s promise and the poor-quality masks sent to Belgium prove that the CCP is not trustworthy. Whoever believes in the CCP will be duped.

In Belgium, both the royal family and key politicians are advocating the BRI project. Its government was said to have placed the discussion of BRI cooperation high on the agenda.

Italy was the first G-7 country to join BRI, over the objections of other EU leaders. It is one of the countries hardest-hit by the global pandemic. More than 25,000 Italians have died from the CCP virus so far. The outbreak in Belgium is just as serious. It is a warning for Belgium: stay far away from the CCP.

Correction: An earlier version of this article misspelled the last name of the Belgian prime minister. The Epoch Times regrets the error.