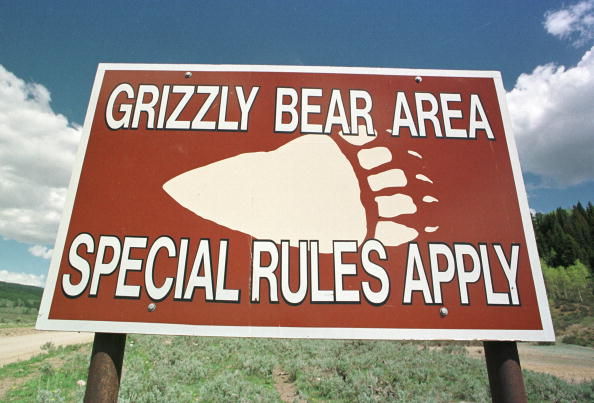 A sign warning vistors of grizzly bears sits at the entrance to Bridger-Teton National Forest May 27, 2001 near Cora, WY. State and federal wildlife officials are urging the public to be cautious this summer about grizzly bears while visiting parks in northern Wyoming. (Photo by Michael Smith/Getty Images)
Environment

Perspectives on Bear Spray – From the Field

When I was a kid, I used to ride around in my mom’s little hatchback with no seatbelt except the almighty motherly arm-fling every time she slammed on the brakes. Funny how times change — my own daughter is put in a 5-point harness car seat like a racecar driver. Putting on a seatbelt is routine and commonplace – and the same should be true of carrying bear spray in bear country. Each time I walk out the door to enjoy a hike or work in bear country, I carry bear spray. I have had to face the friendly chuckles and jokes about why I am carrying it so close to town or on popular trails. So why do I continue to carry it? Because like a seatbelt, the benefits far outweigh the potential risk, however unlikely.

Though conflicts with bears are fairly rare, in the case of an attack, bear spray gives you the chance you need to get away. Research studies have shown that 98 percent of those who carry bear spray will come out of a close encounter with a bear uninjured.  In fact, bear spray has an even higher rate of success in protecting humans from bear conflicts than firearms. Another study assessed more than 250 human-bear conflicts to find that over half of the people that came into a conflict with a bear and used a firearm to protect themselves were injured.  In the same study, when firearms were used, 60 percent of the time, a bear was killed.   The bottom line? Bear spray is a tool that increases your safety while also preventing bear mortalities, since bear spray is not lethal to bears.

While we are strong proponents of carrying bear spray in bear country, nothing can replace common sense.  Bear spray should be there as last defense. It is not there to replace good judgment and actions that avoid conflict in the first place. Here are a few tips I’ve picked up from over 15 years of working and living in bear country.

By being aware and alert in bear country you can avoid conflicts and most likely never have a situation where you have to use bear spray.

People are reluctant to change, and it can be challenging to carry one more thing when you are out and about. Trust me; I have a 4 year old so I am frequently touting snacks, water bottles, a change of clothes, a haggard baby doll and whatever sticks get picked up along the way. Getting out of our house with minimal stuff is usually an unrealized goal. However, sacrificing safety for convenience is something I am not willing to do. It takes adjustment, but in the end it is a win-win for everyone. So as you’re experiencing the great outdoors, be sure to bring along some bear spray and know how to use it if necessary!

This article was originally written and published by Erin Edge, a contributing writer for defendersofwildlife.org. For more information and the original article, please click here.