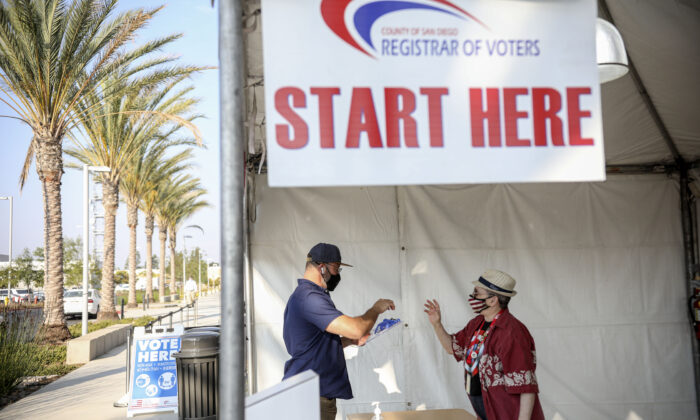 A voter signs-in to cast his ballot at the San Diego County Registrar of Voters in San Diego on Oct. 5, 2020. (Sandy Huffaker/AFP via Getty Images)
Viewpoints

I thought I might provide readers a little perspective on California’s June 7 primary election. The Golden State is unique in many ways, and not just because it’s the most populous state with the best weather. Here are a few ways to look at issues affecting the upcoming election.

When I came here in 1987, the most powerful political entity was the public-employee unions. That hasn’t changed. Since they were granted collective-bargaining powers in the 1970s under Gov. Jerry Brown, the unions have used their vast clout, funded by member dues ultimately paid by taxpayers, to get what they want.

A major change the past 35 years has been the rise of Silicon Valley/San Francisco as the second most powerful power center. That’s especially true when they use their algorithms to skew an election. But the raw power of the tech millionaires and billionaires’ contributions to campaigns also affects everything.

Declining quite a bit in power is manufacturing, especially aerospace. Defense spending was cut after the Berlin Wall fell in 1989, marking the end of the Cold War with the Soviet Union. The presidency also shifted from the Californians in the Nixon/Reagan administrations dominating from 1969-89, to the Texans in the Bush administrations dominating from 1989-2009. Defense spending followed the leaders.

Those cuts sharply reduced the power in California of the mostly conservative engineers and scientists in the industry. The private union members, although largely Democrats, also were of the old working-class, “Reagan Democrat” types, and acted as a balance to the leftist public-employee unions.

Other types of manufacturing also declined as the state’s eco-fanaticism took hold, not to mention high taxes and regulations.

Also waning has been the influence of Hollywood stars, although it’s still there. Does anyone care what Barbara Streisand tweets? Arnold Schwarzenegger was the last Hollywood figure to gain political office.

Yet the state used to have a lot of stars moving directly into politics, the most famous being President Ronald Reagan, the state’s governor from 1967-75. Others included U.S. Sen. Pat Murphy, a bigger star than Reagan, known for his musicals. For a time it was thought he had a better chance of becoming president.

Sonny Bono, of Sonny and Cher fame, became mayor of Palm Springs, then a U.S. representative until his unfortunate death in 1998.

Rob Reiner, best known for playing a hippy anti-war type on the 1970s “All in the Family” TV show, pushed into law the First 5 initiative, Proposition 10 in 1998. It taxed cigarettes 50 cents a pack to fund preschool programs.

He became the head of the First 5 California Children and Families Commission, sparking speculation he might himself run for governor. But he resigned in 2006, “amid accusations that the commission used tax money to boost his new political campaign,” the Los Angeles Times reported. That was for a new initiative to raise income taxes.

Nowadays, Reiner tweets in favor of the Biden administration’s funding of the Ukrainian government in its war with Russia.

The state’s Top Two system has distorted elections, as I have detailed here on The Epoch Times. Let me add something new. California, despite claims it is the world’s fifth richest “nation state,” actually is a subdivision of the United States of America.

That’s because, with the Electoral College, finishing third almost always means you get zero electoral votes. Ross Perot garnered 19 percent of the popular vote in 1992, but not even one electoral vote.

That two-party system carries over to the 50 states, or is supposed to. Except the Top Two system gives a vast advantage to the majority party, in California’s case the Democratic Party. In the two most recent races for U.S. Senate, the top two candidates were Democrats: Sen. Dianne Feinstein vs. Kevin de Leon in 2018. And Kamala Harris (now the vice president) vs. Loretta Sanchez in 2016.

In 2022, it could happen again for the process leading to the November election. Sitting Sen. Alex Padilla currently has $9.9 million in campaign funding, as of the May 18 reporting date. Second is Dan O’Dowd, another Democrat. The top Republican is Mark Meuser, at a puny $413,953.

(I’m skipping the Special Election, also held on June 7, to fill the remainder of Sen. Padilla’s current term, which he almost certainly will win.)

California politics also involves the governor automatically being considered a candidate for president. He’s always looking 3,000 miles to the east to a house with white walls.

Reagan, of course, succeeded. Jerry Brown ran three times for the promotion. Pete Wilson was running in 1996 until an odd ailment gave a whistling sound to his voice and he quit to get an operation. Gray Davis got Potomac Fever until he was recalled in 2003. Even Schwarzenegger, according to biographer Ian Halperin, was trying to find a way to amend the U.S. Constitution to allow foreign-born candidates.

Despite his protestations to the contrary, Gov. Gavin Newsom obviously is running for president in 2024 or 2028, depending on the circumstances. But as I have pointed out in The Epoch Times, for some reason he is running only to get the nomination from the leftmost members of the Democratic Party, instead of appealing to the old working-class Democrats—the “Reagan Democrats”—crucial to final victory in Pennsylvania, Michigan, Wisconsin, and other battleground states.

His presidential ambitions have pushed him to embrace the far-left of the political spectrum on abortion, guns, and other issues. That doesn’t “play in Peoria,” as the old saying has it, however well it might play on the Pacific.