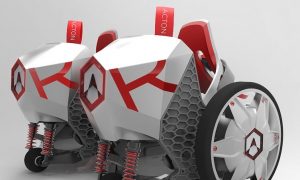 Personal Hoverboards Could Become a Reality With This Kickstarter Campaign

“Remember that cool looking hoverboard from ‘Back To The Future 2’? Would believe us if we told you that you could actually get your hands on one?

A California couple started a Kickstarter campaign for a real-life hoverboard. It’s called the Hendo. But it’ll cost you a pretty penny – $10,000!

The board has four engines that create a magnetic field allowing it to float an inch above the ground. There is one catch though. It can only glide over surfaces like copper and aluminum.

So, no skate parks just yet. If the campaign reaches its goal of $250,000, folks can be hovering around as early as Oct. 21 of next year. Though where are you going to find an aluminum street?

Is this the beginning of affordable personal flying kits? Let’s wait and see how high the Hendo Hoverboard takes the concept.