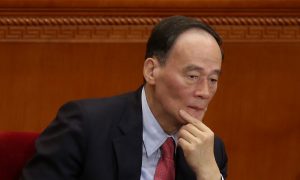 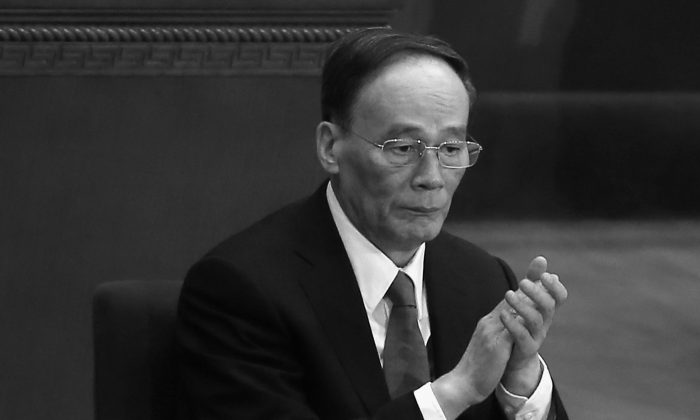 Wang Qishan, secretary of the Central Commission for Discipline Inspection is at the Great Hall of People on March 3, 2015. (Feng Li/Getty Images)
Chinese Regime

Dong Hong, who served China’s vice chairman Wang Qishan as a trusted aide, was placed under investigation, and purged from the Chinese Communist Party (CCP) on the rare charges of “disloyalty and dishonesty to the Party,” among others, according to a notice issued by the CCP’s top anti-graft watchdog on April 12.

The case of Dong is noteworthy because of the years he maintained a close personal relationship with Wang, who staged a nationwide anti-corruption campaign across China to cement Xi Jinping’s rule during the early years of his tenure since 2012. Wang earned himself a reputation as the anti-corruption Czar for his iron will.

Public data shows Dong served Wang as his top personal assistant all the way along while he worked in Guangdong province, Hainan province, and Beijing since 2000.

China news commentator Jiang Senzhe argued on his Youtube channel on April 13 that “disloyalty and dishonesty to the Party” is the harshest accusation against any Party member, weightier than any other corruption or character charge.

Critic Yue Shan regarded Dong’s falling from grace as the outcome of a fierce struggle between Xi Jinping and Wang Qishan.

During his early tenure, Xi and Wang joined hands and in the name of battling corruption eliminated many “tigers and flies”—high- and low-level corrupt officials—that sided with the former CCP head Jiang Zemin.

However, in March 2018 Wang was appointed to the ceremonial position of China’s vice chairman during the two sessions and has maintained a low profile ever since.

Rumors spread that the former close confidants—Xi and Wang—were at odds.

The year of 2020 saw indications that Wang’s influence had waned.

Wang was seldom seen to make public appearances in the first half of 2020. And one of his close friends, Ren Zhiqiang, an outspoken real estate developer, was sentenced to 18 years in jail after he rebuked Xi for his autocracy without calling out his name explicitly.

In March 2021, Wang seemed to demonstrate his allegiance to Xi on public occasions.

On March 6, while attending a discussion in the Hunan delegation during the two sessions, Wang mentioned Xi Jinping at least eight times in his speech. For instance, “we must maintain a high degree of consistency with the CCP Central Committee led by Xi Jinping,” or “find a solution [in] Xi Jinping Thought.”

Wang’s move was interpreted as a compromise or a move out of self-protection that he had made in a power struggle to secure his position in the CCP regime, according to Yue.

The critic further noted that the CCP has two traditions: allegiance-swearing and infighting. It is quite meaningful that Wang would deliver such flattery during the two sessions.

Yue said he believed that the fate of Dong Hong suggests that the CCP-style anti-corruption campaign has come to a dead-end, and that it is impossible to eradicate graft in China without rejecting the CCP’s one-party rule.